In this type of spillway, the water freely drops down from the crest, as for an arch dam (Figure 1). It can also be provided for a decked over flow dam with a vertical or adverse inclined downstream face (Figure 2). Flows may be free discharging, as will be the case with a sharp-crested weir or they may be supported along a narrow section of the crest. Occasionally, the crest is extended in the form of an overhanging lip (Figure 3) to direct small discharges away from the face of the overfall section. In free falling water is ventilated sufficiently to prevent a pulsating, fluctuating jet. 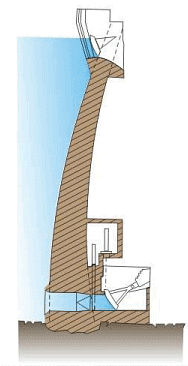 FIGURE 1 Free over fal! spillway for an arch dam

FIGURE 2. Free over fall spillway for a decked embankment dam 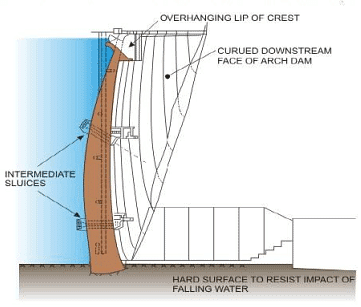 Where artificial protection is provided at the loose, as in Figure 3, the bottom may not scour but scour may occur for unprotected streambeds which will form deep plunge pool (Figure 4). The volume and the depth of the scour hole are related to the range of discharges, the height of the drop, and the depth of tail water. Where erosion cannot be tolerated an artificial pool can be created by constructing an auxiliary dam downstream of the main structure, or by excavating a basin which is then provided with a concrete apron or bucket. 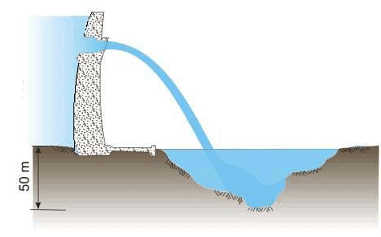 The overflow type spillway has a crest shaped in the form of an ogee or S-shape (Figure 5). The upper curve of the ogee is made to conform closely to the profile of the lower nappe of a ventilated sheet of water falling from a sharp crested weir (Figure 6). Flow over the crest of an overflow spillway is made to adhere to the face of the profile by preventing access of air to the underside of the sheet of flowing water. Naturally, the shape of the overflow spillway is designed according to the shape of the lower nappe of a free flowing weir conveying the discharge flood. Hence, any discharge higher than the design flood passing through the overflow spillway would try to shoot forward and get detached from the spillway surface, which reduces the efficiency of the spillway due to the presence of negative pressure between the sheet of water and spillway surface. For discharges at designed head, the spillway attains near-maximum efficiency. The profile of the spillway surface is continued in a tangent along a slope to support the sheet of flow on the face of the overflow. A reverse curve at the bottom of the slope turns the flow in to the apron of a sliding basis or in to the spillway discharge channel.

An ogee crest apron may comprise an entire spillway such as the overflow of a concrete gravity dam (Figure 7), or the ogee crest may only be the control structure for some other type of spillway (Figure 8). Details of computing crest shape and discharges of ogee shaped crest is provided in Section 4.8.9. 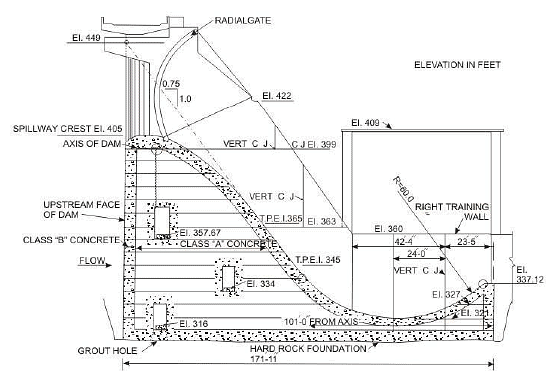 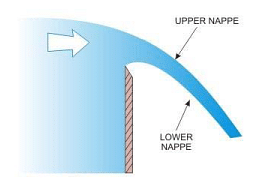 FIGURE 6. Outflow from a free-falling weir property ventilated from below 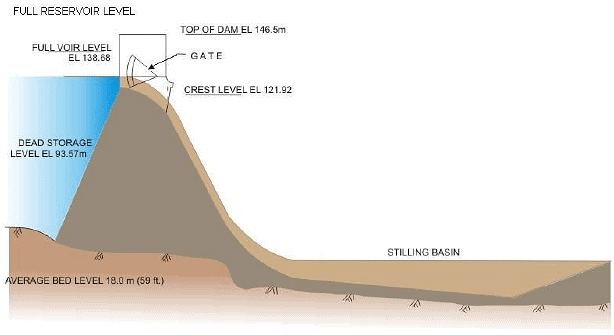 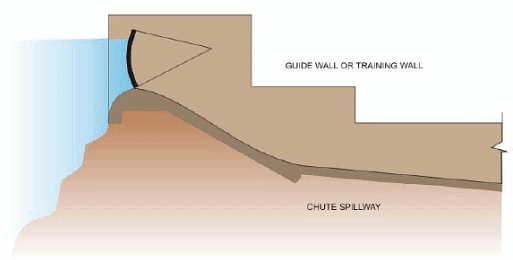 FIGURE 8. Ogee spillway for controlling flow into a chute-type spillway

A chute spillway, variously called as open channel or trough spillway, is one whose discharge is conveyed from the reservoir to the downstream river level through an open channel, placed either along a dam abutment or through a saddle (Figure 9). The control structure for the chute spillway need not necessarily be an overflow crest, and may be of the side-channel type (discussed in Section 4.9.4), as has been shown in Figure 10. However, the name is most often applied when the spillway control is placed normal or nearly normal to the axis of the open channel, and where the streamlines of flow both above and below the control crest follow in the direction of the axis.\

Generally, the chute spillway has been mostly used in conjunction with embankment dams, like the Tehri dam, for example. Chute spillways are simple to design and construct and have been constructed successfully on all types of foundation materials, ranging from solid rock to soft clay.

Chute spillways ordinarily consist of an entrance channel, a control structure, a discharge channel, a terminal structure, and an outlet channel. Often, the axis of the entrance channel or that of the discharge channel must be curved to fit the topography. For further details, one may refer to the Bureau of Indian Standards Code IS: 5186-1994 “Design of chute and side channel spillways-criteria”. 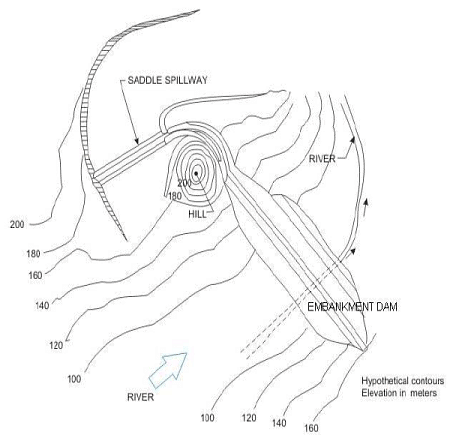 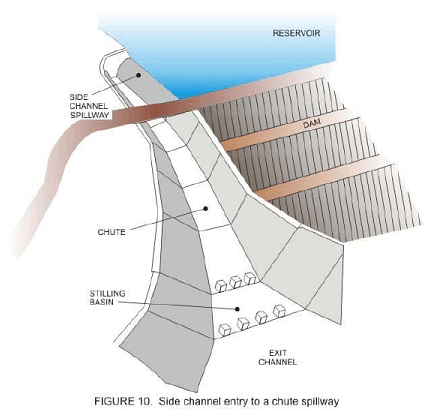 Discharge characteristics of a side channel spillway are similar to those of an ordinary overflow spillway and are dependent on the selected profile of the weir crest. Although the side channel is not hydraulically efficient, nor inexpensive, it has advantages which make it adoptable to spillways where a long overflow crest is required in order to limit the afflux (surcharge held to cause flow) and the abutments are steep and precipitous. 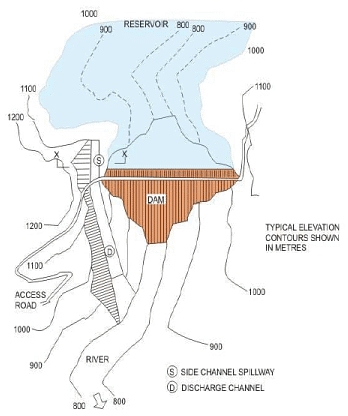 FIGURE 11. Plan of an embankment dam showing side channel spillway and chute channel 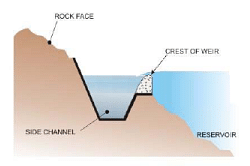 FIGURE 12. Magnified sectional view X-X through the side channel spillway shown in Figure 11

A Shaft Spillway is one where water enters over a horizontally positioned lip, drops through a vertical or sloping shaft, and then flows to the downstream river channel through a horizontal or nearly horizontal conduit or tunnel (Figure 13). The structure may be considered as being made up of three elements, namely, an overflow control weir, a vertical transition, and a closed discharge channel. When the inlet is funnel shaped, the structure is called a Morning Glory Spillway. The name is derived from the flower by the same name, which it closely resembles especially when fitted with antivortex piers (Figure 14). These piers or guide vanes are often necessary to minimize vortex action in the reservoir, if air is admitted to the shaft or bend it may cause troubles of explosive violence in the discharge tunnel-unless it is amply designed for free flow.

Discharge characteristics of the drop inlet spillway may vary with the range of head. As the head increases, the flow pattern would change from the initial weir flow over crest to tube flow and then finally to pipe flow in the tunnel. This type of spillway attains maximum discharging capacity at relatively low heads. However, there is little increase in capacity beyond the designed head, should a flood larger than the selected inflow design flood occur.

A drop inlet spillway can be used advantageously at dam sites that are located in narrow gorges where the abutments rise steeply. It may also be installed at projects where a diversion tunnel or conduit is available for use. 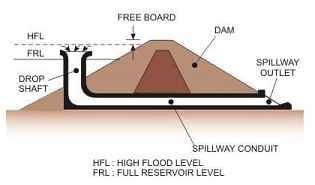 FIGURE 13. Section through a shaft spillway 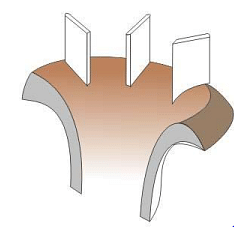