For an ogee crested control weir for a spillway without any control with a gate, the free flow discharge equation is given as

Where Q is the discharge (in m3/s), Cd is the coefficient of discharge, Le is the effective length of crest (in m), including velocity of approach head. The discharge coefficient, Cd, is influenced by a number of factors, such as:

The effect of the above mentioned factors on the variation of discharge and calculation for effective length are mentioned in the following paragraphs.

1. Effect of  depth of approach

For a high sharp-crested ogee shaped weir, as that of a Overfall spillway of a large dam, the velocity of approach is small and the lower nappe flowing over the weir attains maximum vertical contraction. As the approach depth is decreased, the velocity of approach increases and the vertical contraction diminishes. For sharp-crested weirs whose heights are not less than about one-fifth of the head producing the flow, the coefficient of discharge remains fairly constant with a value of about 1.82 although the contraction diminishes. For weir heights less than about one-fifth the head, the contraction of the flow becomes increasingly suppressed and the crest coefficient decreases. This is the case of an ogee crested chute spillway control section. When the weir height becomes zero, the contraction is entirely suppressed and the weir turns into a broad crested one, for which the theoretical coefficient of discharge is 1.70. The relationship of the ogee crest coefficient of discharge Cd  for various values of P/Hd  where P is the height of the weir above base and Hd is the design head, is given in Figure 25. The coefficients are valid only when ogee is formed to the ideal nappe shape. FIGURE 25. Coefficient of discharge (Cd) variation due to height of a vertical faced ogee crest

2. Effect of the crest shape differing from the ideal nappe shape 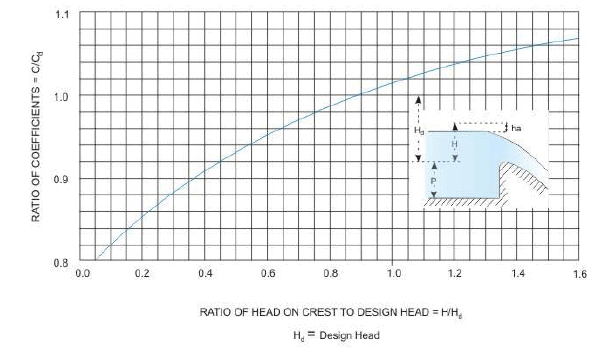 FIGURE 26. Coefficient of discharge other than the design head

This condition is possible for dams of relatively small heights compared to the natural depth of the river, when the water level downstream of the weir crest is high enough to affect the discharge, the condition being termed as submerged. The conditions that after the coefficient of discharge in this case are the vertical distance from the crest of the over flow to the downstream apron and the depth of flow in the downstream channel, measured above the apron.

Five distinct characteristic flow conditions can occur below an overflow crest, depending on the relative positions of the apron and the downstream water surface:

According to USBR (1987), the relationship of the floor positions and downstream submergences which produce these distinctive flows can be shown in a graph as in Figure 28. FIGURE 28. Effects of downstream influences on flow over weir crests 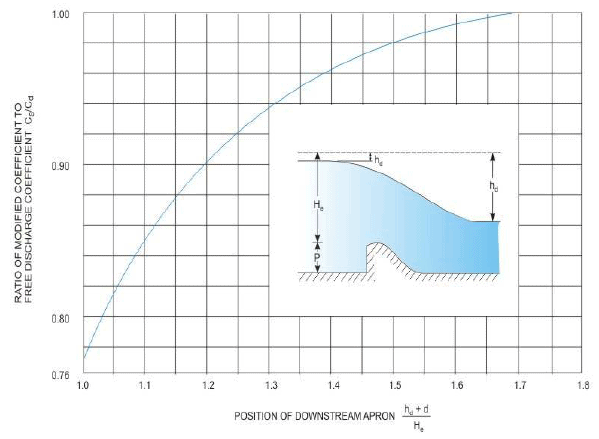 FIGURE 29. Ratio of discharge coefficients resulting from the effect of the apron on flow 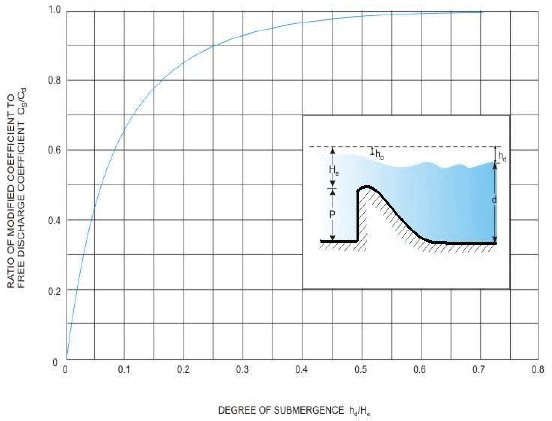 If the ordinate of Figure 30 is changed from hd/He  to 1 - hd/He , that is, equal to He - hd/ He = h/He where h is the downstream water depth measured above crest, then the curve of Figure 30 may be transposed as in Figure 31. Figure 31. Ratio of submerged discharge coefficient to that without submergence effect This figure is similar to that given in Figure 30. but with different ordinate value

The total head on the crest He, does not include allownces for approach channel friction losses due to curvature into the inlet section, and inlet or transition losses. Where the design of the approach channel results in appreciable losses, they must be added to He to determine reservoir elevations corresponding to the discharges given by the discharge equation.

Where L, Le and H have been explained before, N is the number of piers and Kp and Ka are the pier and abutment contraction coefficients. The reason for the reduction of the net length may be appreciated from Figure 32. 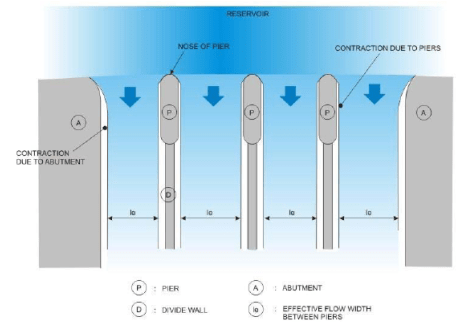 Figure 32. Abutment and pier contractions shown on a spillway plan

The pier contraction coefficient Kp depends upon the following factors:

For the condition of flow at the design head, the average values of pier contraction coefficients may be assumed as shown in Figure 33. 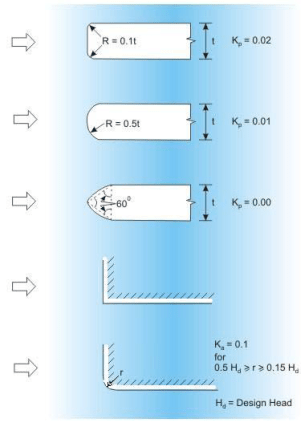 The abutment contraction coefficient is seen to depend upon the following factors:

For the condition of flow at the design head, the average value of abutment contraction coefficients may be assumed as shown in Figure 33.

For flow at head other than design head, the values of Kp and Ka may be obtained from graphical plots given in IS: 6934-1973 “Recommendations for hydraulic design of high ogee overflow spillways”.

The discharge for gated crests at partial gate opening is similar to flow through a lowhead orifice and may be computed by the following equation recommended by the Bureau of Indian Standards code IS:6934-1998 “Hydraulic design of high ogee overflow spillways-recommendations”.

Where Q is the discharge (in m3/s), Cg is the gated coefficient of discharge, G0 is the gate opening (in m), Le is the effective length of crest, g is the acceleration due to gravity, and He is the hydraulic head measured from the centre of the orifice (in m). 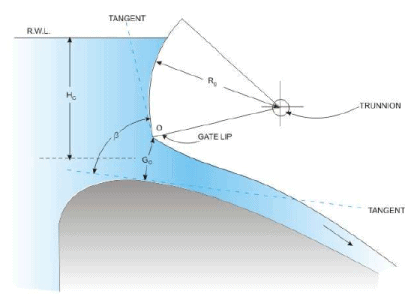 Usually for high head spillways, radial gates are common and Figure 34 shows the position of a partially opened radial gate over an ogee-crested spillway. The gate opening G0 may be seen to be measured as the shortest distance from the gate lip to the ogee crest profile meeting at G. The angle β is seen to be measured between the tangent at G and the tangent of the radial gate at gate lip. Figure 35 presents a curve relating the coefficient of gated discharge Cg with the angle β. 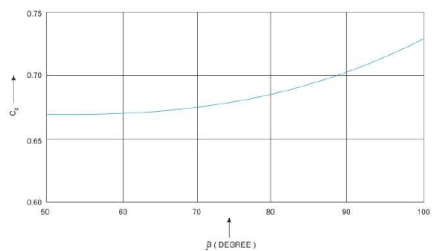 The curve presents an average value of Cg determined for various approach and downstream conditions and may be used for preliminary design purposes. In fact, it may be noticed that the discharge equation mentioned above for calculating flow through a gated spillway as recommended in IS: 6934-1998 may not be strictly correct as the gate opening becomes larger, comparable to the hydraulic head Hc.