India jump one place to 5th in latest FIH rankings
On 17th July 2018, India has improved one spot and has reached the 5th position in the men’s hockey world rankings released by the International Hockey Federation (FIH).

India jumps to 5th place in latest FIH rankings:
i. India has improved due to its second consecutive runner-up finish at the Champions Trophy in Breda, Netherlands held in July 2018.
ii. Australia, that had won the Champions Trophy, remained on the top spot.

iii. Most of the teams in the top 20 have not changed positions. However, 18th placed Austria and 19th placed Egypt have improved ahead of France which is now in 20th position. 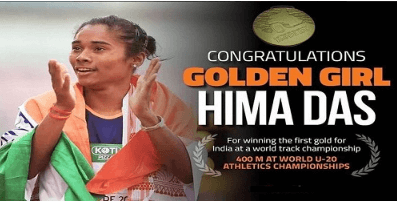 Hima Das won Gold in the women’s 400 metre event:
i. On 12th July 2018, India’s Hima Das bagged gold medal in the women’s 400 metre event at the IAAF World U20 Championships.
ii. Hima Das has become the first Indian track athlete to win gold medal in a world championship across all age groups. She registered a time of 51.46 seconds in the finals.
iii. Romania’s Andrea Miklos won silver medal with a personal best time of 52.07 seconds. United States’ Taylor Manson registered a timing of 52.28 and finish in third position.
iv. Earlier, javelin thrower Neeraj Chopra had won gold medal in Poland in the 2016 edition with a world record.
v. In the World Junior Championships Seema Punia had won bronze medal in discus in 2002 and Navjeet Kaur Dhillon had won bronze medal in discus in 2014.