i. Divij Sharan and Scott Lipsky defeated Santiago Gonzalez and Julio Peralta by 6-4, 2-6, 10-5 in the finals. They won the 2017 European Open title.

ii. Divij Sharan has won his first title of the 2017 season on the ATP World Tour, and third overall, by winning the European Open trophy.

iii. His first two ATP titles came with compatriot Purav Raja, who now plays with Leander Paes. They had won titles in Bogota (2013) and at Los Cabos (2016).

iv. Divij Sharan will next play a Challenger event in Brest with Scott Clayton and may also play in two home Challengers in Pune and Bangalore in November 2017.

i. Manav Thakkar hails from Surat. He was previously placed at No. 5 position. He has reached the top position of top ITTF Junior Circuit standings after finishing runner-up at the 2017 Serbian Junior and Cadet Open, Belgrade.

ii. Through this Manav Thakkar has ensured a place for himself in the ITTF World Junior Circuit Finals to be held in February 2018 in Luxembourg.

i. India is hosting the tournament for the first time in its history.

iii. “It feels great to win here in front of our people, even if this puts a little extra-pressure on us,” said Sidhu at the end of the medal ceremony. “There were high expectations on us and a lot of eyes were looking at me and Jitu for this final, that’s why we trained a lot together in the last days.”

iv. “We like this format, it’s a bit longer than the other ones we tried, but we like definitely like it,” added Rai, who previously won two medals duringthe ISSF World Cup Stage 1 that took place in New Delhi last February and March. 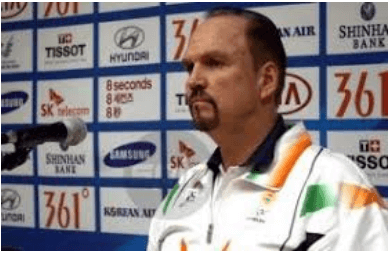 ii. Fleming, was earlier head coach of the Crusaders Basketball team at the Northwest Nazarene University. He served as India men’s head coach from 2012-2015. He spend two years as an assistant coach for Texas Legends of the NBA G League.

iii. He has 25 years coaching experience, including 20 seasons as head coach and athletic director at Mount Vernon Nazarene University (Ohio). He has won two National Coach of the Year awards and a Christian College National Championship.

ii. His wife Seema is also an actress. He has directed more than 150 movies in his 40 year career. He started his career as an art director for Kaliyalla Kalyanam in 1968.

i. The UN General Assembly declared 24th October as  World Development Information Day in 1972. This was done to draw the attention of the world to development problems and the need to strengthen international cooperation to solve them.

ii. The UN General Assembly decided that, the date for the World Development Information Day should coincide with United Nations Day. Hence 24thOctober was chosen.

iv. The main aim of World Development Information Day is improving the accessibility of information and the mobilization of public opinion, particularly among young people.

i. The Disarmament week was established in 1978. The observance of Disarmament Week focuses on raising public awareness of the dangers of the arms race and the need for international disarmament.

ii. This week highlights the need to increase the global understanding of the importance of disarmament. An important focus of this week is trying to convince nations to only keep the weapons they need for an adequate police force.

iii. Disarmament Week focuses on both weapons of mass destruction, including nuclear, biological and chemical weapons, and also small arms.

i. United Nations Day is celebrated on 24th October every year to mark the anniversary of UN Charter which came into force on October 24, 1945. UN Charter is the foundational treaty of the United Nations.

iii. This day is celebrated to spread awareness about aims and achievements of the United Nations Organization.

iv. In 1971, United Nations General Assembly even adopted a resolution declaring United Nations Day as international holiday and recommended that member states should observe this day as a public holiday.

v. Across the world, UN Day is generally marked by meetings, discussions and seminars revolving around role of UN in modern world.