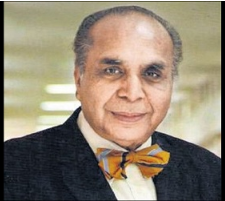 Death of Dr BK Goyal:
i. Dr B K Goyal served patients at the Bombay Hospital since 1966. He was the head of cardiology. In 1980, he was made the Sheriff of Bombay.
ii. He received Padma Shri in 1984, Padma Bhushan in 1989 and Padma Vibhushan in 2005.
iii. He was one among the youngest doctors to become the president of Cardiological Society of India. He also served at the JJ Hospital in an honorary position.
Some stadiums in Maharashtra:
♦ Akola Cricket Club Ground – Akola
♦ Ambajhari Ordinance Factory Ground – Nagpur
♦ Bandra Kurla Complex Ground – Bandra

Eminent Malayalam writer Kunhiraman Panoor passes away
On 20th February 2018, Kunhiraman Panoor, author and civic rights activist, passed away due to age related ailments, in Kerala.
Death of Kunhiraman Panoor:
i. Kunhiraman Panoor was 91 years old. He started his career as an official in the revenue department.
ii. His popular book is ‘Keralathile Africa’. He had received Kerala Sahithya Akademi honour in 2006.
iii. He retirement as deputy collector, and later served as the registrar of Malayala Kalagramam, in New Mahe. He had fought for various human right causes.
Some dams of Kerala:
♦ Malampuzha Dam – Malampuzha River
♦ Parambikulam Dam – Parambikulam River
♦ Solaiyar Dam – Chalakkudi River