Standard CostingStandard costs are extensively recognized in all countries of world. It is an effectual procedure to control cost and assist to accomplish organizational goal. Standard costs are realistic estimates of cost based on analyses of both past and projected operating costs and conditions. In this procedure, standard cost of the product and services is determined in advance and comparing it with actual cost variance to ascertain and analyse. Huge accounting literature has stated that standard costing is the preparation and use of standard costs, their comparison with actual cost and the analysis of variance to their causes and points of incidence (ICMA, London). According Wheldon, standard costing is the method of ascertaining the costs whereby statistics are prepared to show standard cost, actual cost, and the difference between these costs which is termed as variance. Other theorists like Brown and Howard described that standard costing is a technique of accounting which compares the standard cost of product and services with actual cost to determine the efficiency of operations so that remedial actions can be taken immediately (Gupta, et, al., 2006).

The three components of standard costing:

The following elements are used to verify a standard cost per unit:

4. Organization for Standard Costing: The achievement of the standard costing system depends upon the consistency of standards, therefore the responsibility for setting standard is vested with the Standard Committee. It consists of following team:

5. Setting of Standards: The Standard Committee is responsible for developing standards for each component of costs such as Direct Material, Direct Labour, Overheads ( Fixed overheads and Variable Overheads).

Merits of standard costing: It is a very useful tool to control the cost. It is the analysis of variances which reduces the cost and increase profitability. It is also beneficial for management because it assists in fixation of selling price, ascertaining the value of closing stocks of work in progress, determining idle capacity, and performs various management functions. The standards provide incentives and motivation to work and help in increasing efficiency and productivity. This technique is helpful in optimal use of resources. Standard costing helps in budgetary control and in decision making. This technique is economical for users (Gupta, et, al., 2006).

Demerits of Standard costing: In this technique, establishing standards is difficult. Standards are determined by keeping in view the marketing condition, availability, and efficiency of labour, machine and plant. All these factors are not static. Standard costing requires specialists and expert staff. This involves heavy expenditure for the concern. This technique is impractical for small scale industries (Gupta, et, al., 2006).It can be established that Standard Costing is a notion of accounting to determine of standard for each constituent of costs. These fixed costs are compared with actual costs to realize the deviations known as "Variances". Recognition and analysis of causes for such variances and corrective measures should be taken in order to beat the reasons for Variances.

Standard Costing Problem 1:Normal number of workers 100Number of hours paid for in a week 80Standard Rate of wages per hour Rs.1.60Standard Output of the departmentper hour taking into account normal idle time 40 unitsIn the first week of January 2003 it was ascertained that 2,000 units were produced despite 20% idle time due to power failure and actual rate of wages was Rs.1.80 per hour. Calculate Labour Variances.Solution: Standard Costing Problem 2:
From the following data prepare a unit cost statement showing the prime cost of product A and B together with analysis of variances: Standard Costing Problem 3:A gang of workers normally consists of 30 men, 15 women and 10 boys. They are paid at standard hourly rates as under:

In a normal working week of 40 hours, the gang is expected to produce 2,000 units of output. During the week ending 31st December, 2002, the gang consisted of 40 men, 10 women and 5 boys. The actual wages paid were @ Re 0.70, Re 0.65 and Re 0.30 respectively. 4 hours were lost due to abnormal idle time and 1,600 units were produced.Calculate:(i) Wage Variance;(ii) Wage Rate Variance;(iii) Labour Efficiency Variance;(iv) Labour Mix Variance; and(v) Labour Idle Time Variance.
Solution: 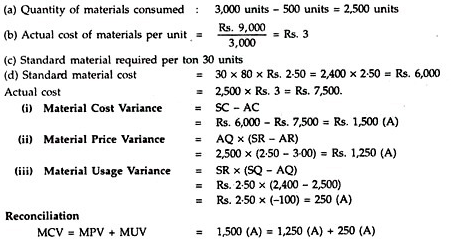