Def. Integrate (a function). To integrate a function is to go through the process of finding the integral or primitive of the function.

It is a notation that follows logically if we assume we can use the usual algebraic rules in the manipulation of differentials in equation form. The notation follows as a logical consequence of the rules. For example, consider the following.

By the definition of an integral or primitive we have the following relationship between a function f(x) and its primitive F(x):

Then, using algebraic rules of manipulation,

Taking the integral of both sides,

Thus, using rules of algebraic manipulation, we have started with

and deduced that the primitive F(x) is given by

Thus this notation allows us to use algebraic manipulation in solving integration problems.

In addition, most integration problems come in the form of definite integrals of the form

Fundamental integration formulas. The following are the main formulas and rules for integration, the most important of which need to be memorized. Many follow immediately from the standard differentiation formulas. a and m are constants. 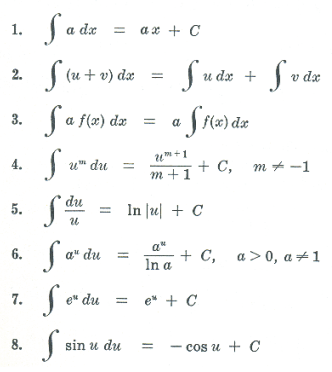 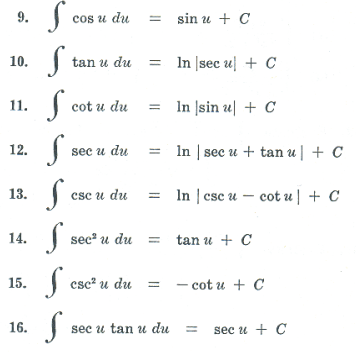 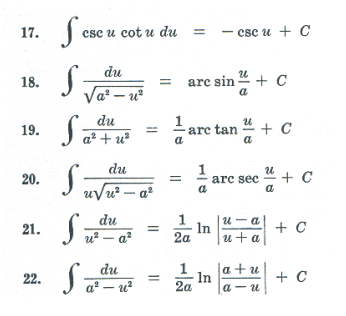 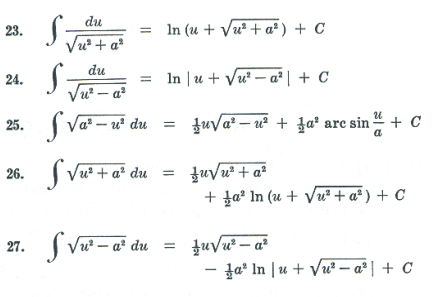 Def. Evaluate (an integral). To carry out the indicated integration, and if it is a definite integral, substitute the limits of integration.

to evaluate. To do it we ask ourselves, “What primitive has the differential f(x)dx?” We use our knowledge of memorized formulas and rules plus various techniques that we have learned plus perhaps integration tables to try to find a primitive, if one exists. There is no set procedure. Creativity and ingenuity are often needed. Typically we may do a lot of manipulating and experimenting. If we find a primitive F(x), then the integral is given as

where C is any constant.

If we are presented with a definite integral such as

to evaluate, then the solution will have the form

There is, however, no guarantee that a solution exists that is expressible in terms of elementary functions. For example, none of the functions