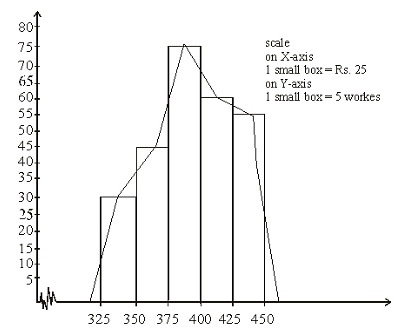 (2) Frequency polygon without using Histogram: Following procedure is used to make a frequency polygon without using histogram.(i)  Calculate the class marks, x1, x2, ...., xn of each of the given class intervals.(ii) Mark class marks x1, x2, .... xn, along X-axis and frequencies f1, f2, .... fn along Y-axis.iii) Plot the points (x1, f1), (x2, f2), ,....., (xn, fn).(iv) Obtain the mid-points of two class intervals of zero frequencies at the beginning of the first interval and at the end of the last interval.(v) Join the points (x1, f1), (x2, f2), ..., (xn, fn) by the line segments and complete the frequency polygon by joining the mid points of the first and last intervals to the mid points of the imagined classes adjacent to them.

More than Type:We apply the following steps to construct a more than type ogive:Step (1)    :   First of all we make class intervals in exclusive form if it is given in inclusive form.Step (2)    :   Then we construct a more than type cumulative frequency distribution.Step (3)    :   Now we mark lower lass limits along x-axis and cumulative frequencies along y-axis.Step (4)    :  We plot the points (lower class limit, corresponding cumulative frequency) and join them by a free hand curve.Step (5)    :   The upper limit of the last class interval becomes the lower limit of the imagined class interval with frequency 0. We join the imagine point (upper limit of last class, 0) with the last point of the curve to end the ogive.In this way we get the required curve called an ogive by more than type method. 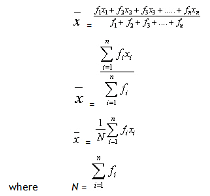 Merits of Arithmetic Mean(i) A. M. is rigidly defined.(ii) It is very simple. One can easily understand and calculate it.(iii) It is uniquely defined.(iv) It is based upon all the observations.(v)  A. M. is least affected by sampling fluctuations.(vi) We can mathematically analysis mean.(vii) A. M. relatively reliable.

Demerits of Arithmetic Mean(i) A. M. cannot be used for qualitative characteristics like richness, beauty, poverty etc.(ii)  A. M. of a given data can not be determined by inspection. It can be also represented graphically also.(iii) If any observation is missing then A.M. cannot be calculated.(iv) A. M. is very much affected by extreme values. In case of extreme items, A. M. gives a distorted picture of the distribution and no longer remains representative of the distribution.(v)  If the extreme class is open, e.g. below 10 or above 100 then A. M. cannot be calculated.(vi) If the given data from which the mean has to be calculated, is not given then A. M. may lead to wrong conclusions.(vii) A. M. cannot be used in the study of ratios, rates etc.

Uses of Arithmetic Mean(i) A. M. is extensively used in practical statistics.(ii)  Estimates can be obtained using A. M.(iii) A. M. is used for different purposes by different persons like it is used for calculating average marks of the students. It is also used by businessmen to find out profit per unit article, output per machine, average monthly income and expenditure etc.=  16 – 6=  10Hence, f1 = 6 and     f2 = 10

MEDIANMedian is defined as the value of that item of the arrayed data which divides the whole data into two equal parts. Hence we have following definition of median:

The middle item of the arrayed data is called its median.

Calculation of median of raw data:(i)   If the number of observations ‘n’ is odd, then the median will be the value of  observation.