Industrial catalytic processes can be broadly classified into five major sector as shown in the Fig. 1 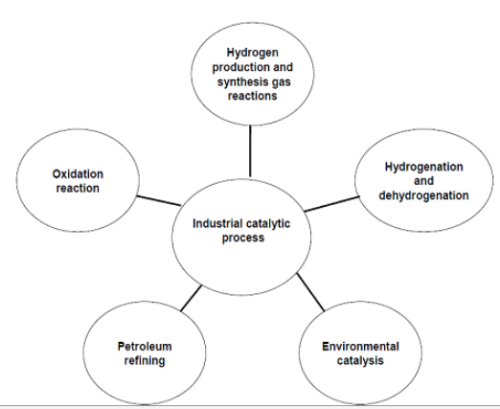 In this section few representative processes will be discussed emphasizing on the catalyst used, reaction kinetics and catalyst deactivation, if any.

Sulfur and chloride compounds in the feed act as catalyst poisons. Therefore, before the reforming process, feed is treated to remove these compounds. Sulfur is removed by desulphurization followed by scrubbing by ZnO adsorbent. By this process, sulfur is reduced to less than 0.01 ppm

For steam reforming of natural gas which mostly consist of methane, the overall reaction is given as:

This reaction is always accompanied with methanation and water gas shift reaction.

The overall process is endothermic and heat is supplied to the reformer. Relative amount of H2 and CO can be adjusted by process conditions. Since the overall steam reforming reaction is highly endothermic and the product volume is greater than that of the reactants, equilibrium favors the forward reaction at high temperature and low pressure. High steam to methane ratio and high temperature favors conversion of CH4. As temperature is lowered, the slightly exothermic WGS reaction becomes increasingly more favorable. Higher steam to methane ratios at lower temperature result in lower CO concentration. The H2 to CO ratio thus depends on operating temperature for steam reforming and water gas shift reactions. 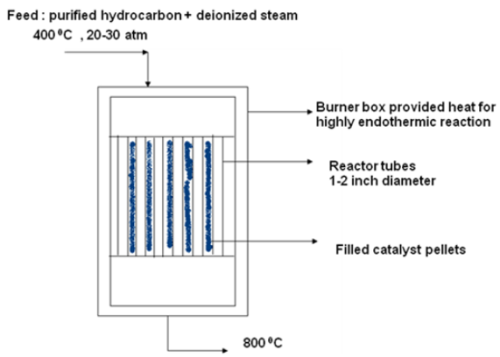 Oxide sites are generally located on the surface of the supports. Support also stabilizes the well dispersed metallic phase. Because of the severe high temperature reaction conditions, catalyst must have high thermal stability. The typical decreasing activity order for metals is Rh, Ru > Ni > Pd, Pt >Ni-Cu >Co. This order varies with hydrocarbon. Pt and Pd are less active than Ni for steam reforming of naphtha, however are more active than Ni for steam reforming of toluene. Noble metals are more resistant to carbon deposition and more tolerant to sulfur poisoning than Ni. However, b ecause of greater availability and lower cost, Ni is the preferred metal catalyst for commercial applications. Thermally stable supports of low acidity are needed to prevent deactivation by sintering and carbon depositions.

The order of decreasing acidity of supports:

Thus CaO, MgO are most desirable supports to prevent carbon depositions. These are also among most thermally stable supports. Promoters such as potassium alumino - silicate lowers the acidity of supports & catalyze carbon gasification with steam. 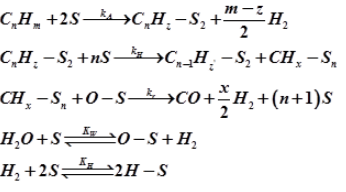 The corresponding rate was derived as

Sulfur and chlorides act as catalyst poisons. As mentioned earlier, the feed is initially pretreated for sulfur and chloride removal. Another major source of deactivation is coke deposition on the catalyst. Formation of carbon occurs by decomposition of hydrocarbon and CO on the surface of catalysts

Gas phase non catalytic pyrolysis of hydrocarbons also contributes to coke deposition. All of these processes are favored at high temperature. High temperature also results in sintering, growth of metal crystallites and collapse of catalysts support which can cause decrease in activity.

Carbon can be removed by steam gasification. Carbon deposition can be avoided by operating at sufficiently high H2O to C ratio.

The exit gas from the primary reformer contains about 10-13 % CH4 which is further reformed in secondary reformer. Inlet temperature is 8000C and the outlet temperature is 900-10000C. These high temperatures drive the forward reaction and reduce the CH4 content to less than 1%. Outlet CO concentration is 10-13 %. Reactor is lined with ceramic material to prevent damage.

Gas from the secondary reformer contain 10-13 % CO and is further processed to increase the H2concentration. The high temperature water gas shift reaction lowers the CO concentration to about 2-3 % in a fixed bed reactor.

A typical catalyst is composed of 90 % Fe3O4 and 10 % Fe2O3. Fe3O4 acts as the active metal while Fe2O3 acts as a stabilizer to minimize sintering of the active iron oxides. The catalysts are prepared by precipitation.

The rate expression from Langmuir Hinshelwood model proposed is given as [4] :

k is the rate constant and Ki's the respective adsorption constants. The ‘i' represents the chemical species.

Activation energy for the water gas shift reaction on iron oxide/chromia is in the range of 122 kJ/mol. Reaction over small pellets (5 x 4 mm) operates with an effectiveness factor of unity below 3700C and 31 atm.

The catalyst is deactivated by adsorption of residual S or Cl containing compounds that escape the initial purification steps.

The CO concentration of the existing gas from high temperature WGS is 2-3 % and further reduced to below 0.2 % by low temperature water gas shift reaction. The WGS reaction as favored at low temperature, operating temperature is maintained at 2000C, the minimum temperature at which steam is not condensed and operating pressure at 10-30 atm.

A typical catalyst is composed of CuO/ ZnO/Fe2O3 and prepared by co-precipitation method. The catalyst is highly selective for shift reaction with low activity for methanation reaction. CuO is the catalytically active metal and ZnO minimize sintering of Cu. Cu is highly sensitive to poisoning by S or Cl compounds even at very low level of 1 ppm. ZnO & Fe2O3 also scavenge the S or Cl compounds protecting Cu which is highly sensitive to poisoning by these compounds. Catalyst is reduced very carefully by H2 and the bed temperature is never allowed to rise above 2300C to avoid sintering of Cu. The high temperature shift catalyst also protects the low temperature catalyst from these poisons.

Kinetic m odel is based on surface redox mechanism involving dissociation of water to OH radicals which further dissociate to atomic oxygen. The rate expression as proposed by Ovensen et al.[2] is

After low temperature WGS, the CO content in hydrogen stream is 0.2-0.5 % and must be reduced to 5 ppm level for using the H2 for ammonia synthesis. The CO is further reacted with hydrogen and converted to methane. The catalyst is typically Ni/Al2O3. MgO is sometimes used as a promoter to minimize sintering of Ni. The process is carried out at 300 -3500C and at 30 atm pressure. Care must be taken to avoid formation of poisonous Ni(CO)6 which occurs below 2000C at partial pressure of CO greater than ~ 0.2 atm.