If you’re familiar at all with the GRE, then Data Interpretation may not be a foreign concept. Data analysis is one of the four main tested Quantitative concepts on the GRE, so it’s no surprise that the GMAT added it as one of the four new Integrated Reasoning question-types. The Graphics Interpretation section will present you with a piece of data in the form of a graph, Venn diagram, scatter plot, etc. Below will be two statements, each with a missing portion. Fill in the blank with one of four choices presented to you in a drop-down menu.

Start With the Big Picture

In a general way, categorize the presented graphic. (EX: “This is a graph showing the change in the price of textiles per yard over the course of five years.”) Do not just skip the graphic entirely and go straight to the two statements! This will significantly decrease your accuracy as you must spend the majority of your time focusing on understanding the graphic thoroughly in order to later “interpret” it. Make sure you read every tiny piece of writing on or near the data, including titles, the labels for the x and y-axes, column names, and even footnotes. Scroll down or left/right if necessary to make sure you’ve caught everything.

Once you understand the big picture, take special care to note any units (mph, m/sec, cm2, etc.) on the graph, or any symbols provided. Are we dealing with seconds, minutes, or hours? Does one graph represent the month of June, while another graph represents the entire year? For example, if this Sample Graphics Interpretation question from MBA.com, it’s interesting to note that virtually the entire question hinges on your recognition that the hourglass symbol represents 10 students, and on your ability to apply that to the given Venn diagram.

Locate Any Trend in The Data

Quickly note the relationship between any given variables in the graph. For Venn diagrams, ask yourself where the least and greatest number of people lie. Do any variables have a direct or indirect correlation? Where does the data seem to spike or significantly decrease?

Identify The Keywords in The Sentences

Even small words like “less than” or “equates to” can make a huge difference. What keywords are found in the statements that are ALSO found in the graphic? Move slowly through each statement.

Predict Before Looking at The Drop-Down

Come up with your own answer choice before clicking on the options in the drop-down menu. If you do not find your answer as one of the presented options, you have likely made a simple mistake either in 1) your understanding of the way information if presented in the graphic, or 2) your understanding of the specific phrasing of the statement. Don’t worry if your predictions are off at first. Graphics Interpretation can be challenging! 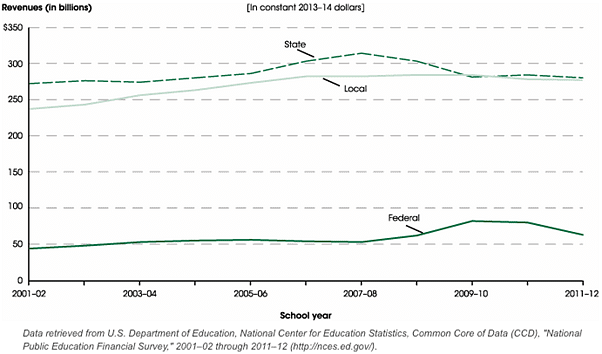 The graph shows revenues for public elementary and secondary schools by revenue source for the school years from 2001-02 to 2009-10.

From each drop-down menu, select the option that creates the most accurate statement based on the information provided.

Revenue from the state government was highest during the year.

During the 2001-02 school year, revenue from the federal government accounted for about % of total revenue.Answer optionsThe three options for the first drop-down menu are 2007-08, 2008-09 and 2009-10. For the second drop-down menu, the options are 9, 43 and 48.How to solve this Graphics Interpretation question

You can see easily from the graph that the highest revenue from state government came during the 2007-08 school year. Thus, you would choose this option from the drop-down menu.In 2001-02 the federal government contributed about 50 million, and the state and local governments contributed around 510 million together. Thus, the total revenue was around 560 million. 50/560 —> 5/56 —> ~1/11 —> a little less than 10%. You would then click the drop-down menu and find 9 as the answer.Note that this question involved a line graph. Some questions in the graphics interpretation section of integrated reasoning on the GMAT involve bar graphs, and some questions involve both line and bar graphs. There shouldn’t be any particular difficulties in interpreting bar graphs—the same principles that you use for line graphs apply.Questions in Graphics Interpretation often ask you to calculate percentage change, so keep the following in mind:Review of calculating percentage change

The formula for calculating percentage change is difference / original x 100.For example, if the value of sales (in dollars) increases from 40m to 50m, by what percentage has sales increased?Difference = 50 – 40 = 10