The lone pairs which do not participate in determining the structure of the species are referred to as stereochemically inactive lone pairs. In such cases (e.g. :SbBr63–, :TeCl62–, :TeBr62–, etc.) the number of bonds pairs determine the shape or geometry of the species.

It is believed that in such cases, the stereochemically inactive lone pair exists in an unhybridised s-orbital inside the shell and the lone pair cannot come to the surface of the molecule. 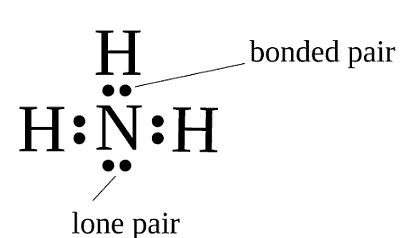 On the other hand, the lone pairs which reside in some hybridised orbitals and actively participate in determining the molecular shapes as expected from VSEPR theory are called stereochemically active lone pairs.Nature of the lone pair in :SbBr63–, :TeCl62– and :TeBr62–: In these compounds steric crowding is sufficiently high thus lone pair will be forced to remain in unhybridised s-orbital inside the valence shell. This lone pair is stereochemically inactive.Nature of lone pair in :XeF6: In case of flourides the steric hindrance is relatively less.

Thus the lone pair in :XeF6 is in the border line in terms of the properties of the stereochemically active and inactive lone pairs. 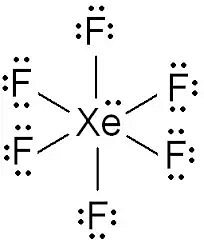 If the lone pair is considered to be stereochemically inactive, then XeF6 should have the perfect octahedral structure and if lone pair is consider to be chemically active then pentagonal bipyramid geometry is considered.Structure of XeF6 in solid state: In solid state, no discrete XeF6 molecule exists and the solid consists of square pyramidal XeF5+ cations extensively bridged by free fluoride ions. In such square pyramid moiety, xenon sits at the basal plane.

However, the bridging fluorides maintain a good deal of covalency. Through F-bridging, hexameric, tetrameric and trimeric rings of XeF5+ F– are produced. :XeF5+ is expected to be of square pyramid shape.Structure of XeF6 in vapour phase: In the vapour phase, it exists as a monomer, XeF6 which appears to have a slightly distorted octahedral structure but the distortion is less than expected from VSEPR theory. Another important characteristic feature is its fluxional character. If :XeF6 is considered to possess a stereochemically active lone pair, then it has got three possibilities, i.e.(i) capped trigonal prism (I),(ii) pentagonal bipyramid (II)  having the lone pair projected along one corner of the equatorial or basal plane (in terms of octahedreon, the lone pair is projected through the mid point of an edge); and(iii) capped octahedron(III) (the lone pair is projected through the centre of a trigonal face of an octahedraon, i.e. the lone pair lies along the C3 axis). Thus in no way, it can have a regular geometry. Thus all the three structures remains in equilibrium with each other.

:XeF6 vs. :XeF82–: Here, the steric crowding is sufficiently high (compared to :XeF6) to convert the lone pair into a stereochemically inactive one. In fact, it adopts the square antiprism where the lone pair contributes nothing to determine the molecular shape.XeF6 + 2CsF → Cs2[XeF8]

Consider the trisubstituted amines and phosphines shown in Fig. Because these molecules are nonsuperimposable upon their mirror images (i.e., they are chiral), they are potentially optically active, and separation of the enantiomers is at least theoretically possible.

This is sufficient to allow the separation of optical isomers, and their recemization may be followed by classical techniques.In contrast, the barrier to inversion in most amines is low (~ 40 kJ mol–1 in methyl-propylphenylamine; about 25 kJ mol–1 in ammonia). With such low barriers to inversion, optical isomers cannot be separated because recemization takes place faster than the resolution can be effected

Highly strained rings such as that shown in Fig. would inhibit inversion. The presence of electron withdrawing substituents tends to increase the height of the barrier, but electron-donating groups can lower it.

BERRY PSEUDOROTATIONIn PF5 the fluorine atoms are indistinguishable by means of 19F NMR. This means that they are exchanging with each other faster than the NMR instrument can distinguish them. The mechanism for this exchange is closely related to the inversion reaction we have seen for amines and phosphines.

The exchange is believed to take place through conversion of the ground state trigonal bipyramid (TBP) into a square pyramidal (SP) transition state and back to a new TBP structure.

This process results in complete scrambling of the fluorine atoms at the equatorial and axial positions in phosphorus pentafluoride, and if it occurs faster than the time scale of the NMR experiment (as it does), then all of the fluorine atoms appear to be identical. The entire process is called a Berry pseudorotation.

Fig. Berry pseudorotation The exchange of fluorine atoms in PF5 is too rapid to monitor with NMR spectroscopy. The atoms in some other molecules exchange more slowly, especially at lower temperatures.

For example, PCl2F3 is expected to be a trigonal bipyramid with two apicophilic fluorine atoms in the axial positions, and two chlorine atoms and the third fluorine in equatorial positions.

At temperatures of –22ºC and above, the resonance of fluorine is observed as a single doublet. However, if the temperature is lowered to –143ºC, the two axial fluorine atoms can be distinguished from the single equatorial fluorine.Substitution of alkyl groups on the phosphorus atom provides some interesting effects. If a single methyl group replaces a fluorine atom, it occupies one of the equatorial positions as expected and rapid exchange of the two axial and the two equatorial fluorine atoms is observed, as in PF5. If two methyl groups are present. (CH3)2PF3, the molecule becomes rigid and there is no observable exchange among the three remaining fluorine atoms.