The document Stoichiometry And Gravimetric Analysis - Redox Reactions Chemistry Notes | EduRev is a part of the Chemistry Course Physical Chemistry.
All you need of Chemistry at this link: Chemistry

Chemical stoichiometry deals with the determination of quantities of reactants or products of a chemical reaction. The word “stoichiometry” is derived from the Greek word “stoichion “ means element and “ metry “ means measure. Stoichiometry is divided into two subsections.

The concept of amount of substance is confined to the chemical measurements. The amount of substance of a system is proportional to the number of elementary entities (which may be atoms or molecules or ions or specified group of such particles) of that substance present in the system.

Let us take elements Ag, Mg and Hg with masses equal to their atomic masses in grams, and then to our surprise, each element contains equal number of atoms. This is not only limited to atoms but also applicable to molecules.

For example, if we have molecules like, CO2, NO2, SO2 with masses equal to their molecular masses in grams, then they would also contain equal number of molecules. This specified number of atoms or molecules is referred to as a “mole”. 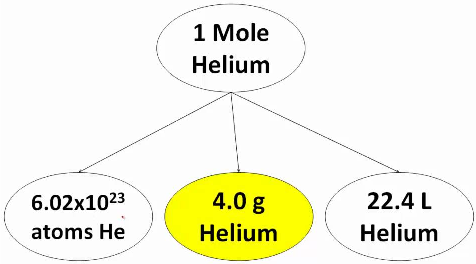 The mass of specific number (6.023 x1023) of elementary entities is equal to atomic mass for atoms and molecular mass for molecules.

Number of moles of a species =

The volume of gas and the number of moles of gas at temperature and pressure other than the STP can be related by ideal gas equation, PV=nRT.

Let the balanced chemical equation we have is

The quantitative information drawn from this balanced chemical equation is

(b)    The molar ratio between the two products can also be known i.e. moles of H2O produced would be double the moles of MnCl2 produced.

(c)    The initial moles of MnO2 and HCl (to be taken in vessel) for the reaction to occur not necessarily be 1 and 4 respectively or in the molar ratio 1:4.

(d)   We can start reaction with MnO2 and HCl taken in any molar ratio, but the moles of two reacting will always be in the molar ratio 1:4.

(e)    The balanced chemical equation should follow the law of conservation of mass.

Let us consider the same chemical system with initial composition as n0MnO2 , n0HCl , n0MnCl2 , n0H2O , n0Cl2 . The n0HCl is four times ofn0MnO2 . When the reaction occurs, these mole numbers change as the reaction progresses. The mole numbers of the various species do not change independently but the changes are related by the stoichiometric coefficients in the chemical equations.

Let after time ‘t’ from the commencement of reaction, the moles of MnO2 reacting be x, then the moles of HCl reacting in the same time interval be 4x since MnO2 and HCl react in the molar ratio of 1: 4.

Thus, after time t, the composition of the system would be:

The algebraic signs + and – indicates that the reactants are consumed and products are formed.

In general, mole numbers of various species at any time would be given as

where ni0 is the initial amount, x is the degree of advancement and vi is the stoichiometric coefficient which will be given a negative sign for the reactants and a positive sign for products .

After long time interval from the commencement of reaction, the composition of the system would be :

Let the initial moles of MnO2 and HCl be n0MnO2 and n0HCl respectively and n0HCl ≠ 4 n0MnO2 . thus in the given chemical reaction, after ∞ time , one of the reactant will be completely consumed while the other would be left in excess. Thus, the reactant which is completely consumed when a reaction goes to completion and which decides the yield of the product is called the limiting reagent.

Reaction in presence of limiting reagent

Thus, MnO2 is the limiting reagent and the yield of all the products is governed by the amount of MnO2 taken initially .

Here, HCl would become limiting reagent and the products yield  are decided by the amount of HCl taken initially.

% yield of the product =

Gravimetric analysis is an analytical technique based on the measurement of mass of solid substances and/or volume of gaseous species.

The gravimetric analysis is broadly classified into three heads:

Let us consider a chemical reaction,

We want to find out the volume of CO2 evolved at STP by heating x g of CaCO3. Then

Volume Of CO2 evolved at STP =

Volume of CO2 evolved at pressure P and temperature

Let us consider the reaction N2 (g) + 3H2 (g) → 2NH3 (g) . We are given x L of N2 at pressure P atm and temperature T K and we want to know the volume of H2 required to react with it at the same pressure and temperature.

Volume of H2 required at same temperature and pressure =

This result could also have been obtained by knowing that for a gaseous relation, at the same pressure and temperature, the moles of gas is directly proportional to volume of the gas (V α n since P and T are constant) or molar ratio and volume ratio are the same.