. This gives an increase in length of

and therefore the strain in x-direction is

Similarly, strains in y and z directions are

.Therefore, we may write the three normal strain components as

In the same way we may define the shear strains. For this purpose consider an element ABCD in x-y plane and let the displaced position of the element be A′B′C′D′ ( Figure-2.3.3.1). This gives shear strain in xy plane as 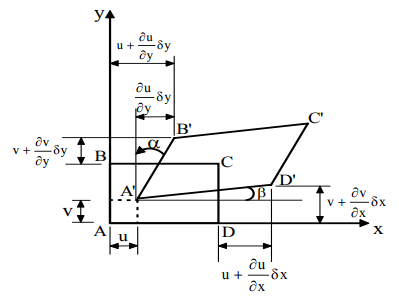 2.3.3.1F- Shear strain associated with the distortion of an infinitesimal element.

We may therefore write the three shear strain components as

Therefore, the complete strain matrix can be written as 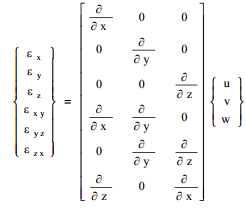 where E is  modulus of elasticity. It is also known that σx produces a strain of

in z-direction. Therefore we may write the generalized Hooke’s law as

It is also known that the shear stress

where G is the shear modulus and γ is shear strain. We may thus write the three strain components as

Rest of the elements in K matrix are zero.

These equations allow the principal strain components to be defined in terms of principal stresses. For isotropic and homogeneous materials only two constants viz. E and ν are sufficient to relate the stresses and strains. The strain transformation follows the same set of rules as those used in stress transformation except that the shear strains are halved wherever they appear.

Relations between E, G and K

So far the state of strain at a point was considered entirely due to applied forces. Changes in temperature may also cause stresses if a thermal gradient or some external constraints exist. Provided that the materials remain linearly elastic, stress pattern due to thermal effect may be superimposed upon that due to applied forces and we may write

It is important to note that the shear strains are not affected directly by temperature changes. It is sometimes convenient to express stresses in terms of strains. This may be done using the relation

we may write the normal and shear stresses as 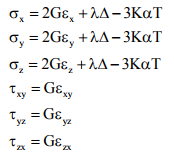 These equations are considered to be suitable in thermoelastic situations.