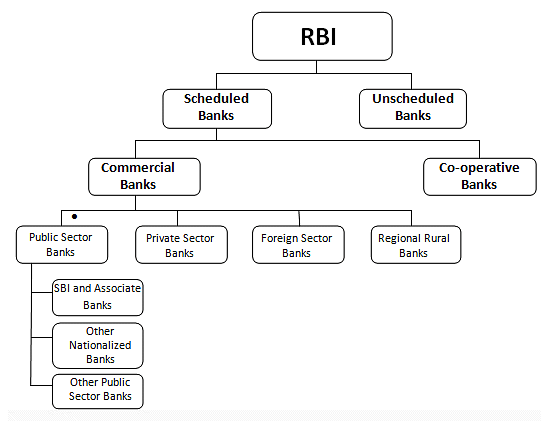 The country had no central bank prior to the establishment of the RBI. The RBI is the supreme monetary and banking authority in the country and controls the banking system in India. It is called the Reserve Bank’ as it keeps the reserves of all commercial banks.

Scheduled commercial banks (SCBs) account for a major proportion of the business of the scheduled banks. SCBs in India are categorized into the five groups based on their ownership and/or their nature of operations. State Bank of India and its six associates (excluding State Bank of Saurashtra, which has been merged with the SBI with effect from August 13, 2008) are recognised as a separate category of SCBs, because of the distinct statutes (SBI Act, 1955 and SBI Subsidiary Banks Act, 1959) that govern them. Nationalised banks  and SBI and associates  together form the public sector banks group IDBI ltd. has been included in the nationalised banks group since December 2004. Private sector banks include the old private sector banks and the new generation private sector banks- which were incorporated according to the revised guidelines issued by the RBI regarding the entry of private sector banks in 1993.

Foreign banks are present in the country either through complete branch/subsidiary route presence or through their representative offices.

These are banks where majority stake is held by the Government of India.
Examples of public sector banks are: SBI, Bank of India, Canara Bank, etc.

These are banks majority of share capital of the bank is held by private individuals. These banks are registered as companies with limited liability. Examples of private sector banks are: ICICI Bank, Axis bank, HDFC, etc.

These banks are registered and have their headquarters in a foreign country but operate their branches in our country. Examples of foreign banks in India are: HSBC, Citibank, Standard Chartered Bank, etc

Regional Rural Banks were established under the provisions of an Ordinance promulgated on the 26th September 1975 and the RRB Act, 1976 with an objective to ensure sufficient institutional credit for agriculture and other rural sectors. The area of operation of RRBs is limited to the area as notified by GoI covering one or more districts in the State.

RRBs are jointly owned by GoI, the concerned State Government and Sponsor Banks (27 scheduled commercial banks and one State Cooperative Bank); the issued capital of a RRB is shared by the owners in the proportion of 50%, 15% and 35% respectively.

Prathama bank is the first Regional Rural Bank in India located in the city Moradabad in Uttar Pradesh.

A co-operative bank is a financial entity which belongs to its members, who are at the same time the owners and the customers of their bank. Co-operative banks are often created by persons belonging to the same local or professional community or sharing a common interest. Co-operative banks generally provide their members with a wide range of banking and financial services (loans, deposits, banking accounts, etc).

They provide limited banking products and are specialists in agriculture-related products.

Cooperative banks are the primary financiers of agricultural activities, some small-scale industries and self-employed workers.

Co-operative banks function on the basis of “no-profit no-loss”.

Anyonya Co-operative Bank Limited (ACBL) is the first co-operative bank in India located in the city of Vadodara in Gujarat.

The co-operative banking structure in India is divided into following main 5 categories:

Banks make money by lending your money out at interest and by charging you for services provided. Banks keep on lending money.

The other big revenue items generated by banks are the fees they charge. Bank charge for every service, whether it is for an electronic transaction, or permitting a transfer through the Internet banking system. 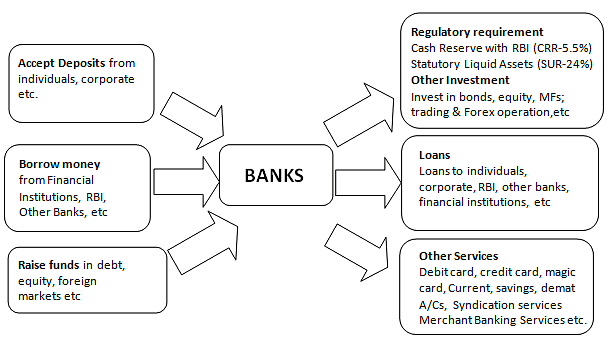 The banking industry in India is highly regulated. Few important regulations are mentioned below:

The core operating income of a bank is interest income (comprises 75-85% in the total income of almost all Indian Banks). Besides interest income, a bank also generates fee-based income in the form of commissions and exchange, income from treasury operations and other income from other banking activities. As banks were assigned a special role in the economic development of the country, RBI has stipulated that a portion of bank lending should be for the development of under-banked and under-privileged sections, which is called the priority sector. Current rules stipulate that domestic banks should lend 40% and the foreign banks should lend 32% of their net credit to the priority sector. On the cost sides, the major items for a bank are interest paid on different types of deposits, bonds issued and borrowings, and provisioning cost for Non-performing Assets (NPAs). 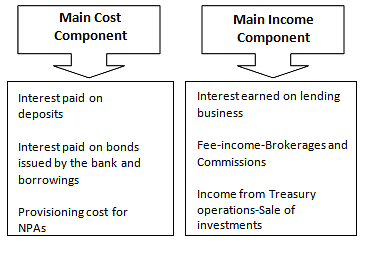 Types of  Businesses of Banks

The banking business can be broadly categorized into Retail Banking, Wholesale or Corporate Banking, Treasury Operations and Other Banking Activities.

Retail banking also known as Consumer Banking is the provision of services by a bank to individual consumers, rather than to companies, corporations or other banks. Services offered include savings and transactional accounts, mortgages, personal loans, debit cards, and credit cards. Retail banking segment is the highest margin business as compared to other business segments in the banking industry. Currently, ICICI Bank is the largest players in this segment in India. Other major players in this segment are SBI, PNB, HDFC Bank, etc.

Typical products offered by a retail bank include:

Wholesale banking is the provision of services by banks to organizations such as Mortgage Brokers, large corporate clients, mid-sized companies, real estate developers and investors, international trade finance businesses, institutional customer(such as pension funds and government entities/agencies), and services offered to other banks or other financial institutions.

Treasury management (or treasury operations) includes management of an enterprise’s holdings, with the ultimate goal of managing the firm’s liquidity and mitigating its operational, financial and reputational risk. Treasury Management includes a firm’s collections, disbursements, concentration, investment and funding activities. In larger firms, it may also include trading in bonds, currencies, financial derivatives and the associated financial risk management. Most banks have whole departments devoted to treasury management and supporting their clients’ needs in this area

Bank Treasuries may have the following departments: