Structured Query Language is a standard Database language which is used to create, maintain and retrieve the relational database. Following are some interesting facts about SQL.

What is Relational Database?

Relational database means the data is stored as well as retrieved in the form of relations (tables). Table 1 shows the relational database with only one relation called STUDENT which stores ROLL_NO, NAME, ADDRESS, PHONE and AGE of students. 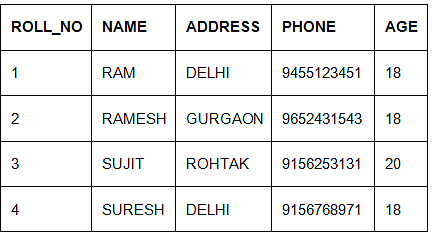 These are some important terminologies that are used in terms of relation.

Attribute: Attributes are the properties that define a relation. example: ROLL_NO, NAME etc.

Tuple: Each row in the relation is known as tuple. The above relation contains 4 tuples, one of which is shown as:

Degree: The number of attributes in the relation is known as degree of the relation. The STUDENT relation defined above has degree 5.

Column: Column represents the set of values for a particular attribute. The column ROLL_NO is extracted from relation STUDENT.

The queries to deal with relational database can be categories as:

So first we will consider the Data Query Language. A generic query to retrieve from a relational database is:

Part of the query represented by statement 1 is compulsory if you want to retrieve from a relational database. The statements written inside [] are optional. We will look at the possible query combination on relation shown in Table 1.

Case 1: If we want to retrieve attributes ROLL_NO and NAME of all students, the query will be: 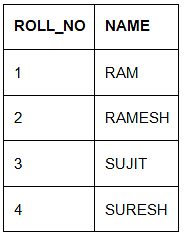 Case 2: If we want to retrieve ROLL_NO and NAME of the students whose ROLL_NO is greater than 2, the query will be:

CASE 4: If we want to represent the relation in ascending order by AGE, we can use ORDER BY clause as:

SELECT * FROM STUDENT ORDER BY AGE; 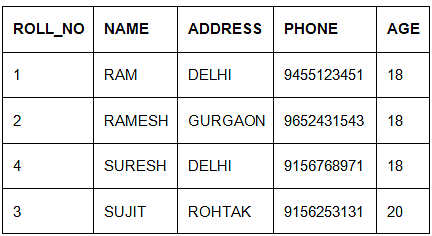 CASE 5: If we want to retrieve distinct values of an attribute or group of attribute, DISTINCT is used as in:

If DISTINCT is not used, DELHI will be repeated twice in result set. Before understanding GROUP BY and HAVING, we need to understand aggregations functions in SQL.

In the same way, MIN, MAX and AVG can be used.  As we have seen above, all aggregation functions return only 1 row.

The above mentioned syntax also retrieves the average value of tupples.

In this query, SUM(AGE) will be computed but not for entire table but for each address. i.e.; sum of AGE for address DELHI(18+18=36) and similarly for other address as well. The output is: 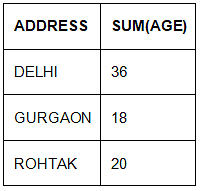 If we try to execute the query given below, it will result in error because although we have computed SUM(AGE) for each address, there are more than 1 ROLL_NO for  each address we have grouped. So it can’t be displayed in result set. We need to use aggregate functions on columns after SELECT statement to make sense of the resulting set whenever we are using GROUP BY.