HemoglobinStructureHemoglobin is a protein made up of four amino acid chains. Each of these chains contains heme, a compound that contains iron and transports oxygen in the bloodstream.Hemoglobin is responsible for the shape of RBCs, which usually appear like donuts—but with a thin center rather than a hole. In conditions involving abnormal hemoglobin, such as sickle cell anemia, the abnormal shape of the RBCs can lead to problems.1

The pigment in hemoglobin is responsible for the red color of blood.

Conditions With Low HemoglobinA low hemoglobin level is often referred to as anemia. Causes of anemia may include anything that interferes either with the level or function of hemoglobin or RBCs.Causes of low hemoglobin include:

In these cases, the increased hemoglobin is the result of the body's compensatory mechanism for low oxygen.A hemoglobin test may show an artificially elevated hemoglobin level due to dehydration. In this situation, hemoglobin is more concentrated when the fluid in the body is low.Hemoglobin may also be elevated in people living at high altitudes due to the oxygen in the atmosphere.

Abnormal HemoglobinConditions in which hemoglobin has an abnormal structure include:

People with thalassemia often have life-long anemia and may require frequent blood transfusions. Thalassemia intermedia is also termed "non-transfusion dependent thalassemia" and may not be discovered until adulthood.

Evaluating Hemoglobin LevelsA hemoglobin level is usually measured as a part of a complete blood count (CBC). The results of other lab tests may also help determine the cause of hemoglobin problems.

Normal hemoglobin levels vary by age and sex. They're measured in grams per deciliter (g/dL).

A Word From VerywellIf you hear about hemoglobin, you may think of bleeding, especially heavy menstrual bleeding. Yet there is a wide range of disorders that can result in either elevated or decreased hemoglobin. In addition, abnormal types of hemoglobin can contribute to disease.In order to determine a cause of low or high hemoglobin, your doctor will ask questions, perform a physical exam, and evaluate other blood tests in combination with your hemoglobin level.

Structural and Function of MyoglobinStructureMyoglobin is a monomeric protein that has 154 amino acids residues. It consists of eight α-helices connected through the turns with an Oxygen binding site. It has a globular structure. Myoglobin contains a heme (prosthetic) group which is responsible for its main function (carrying of oxygen molecules to muscle tissues). Myoglobin can exist in the oxygen free form, deoxymyoglobin, or in a form in which the oxygen molecule is bound, called oxymyoglobin. Myoglobin is a protein found in muscles that binds oxygen with its heme group like hemoglobin. Heme group consists of protoporphyrin organic component and an iron atom located in its center. The heme group gives muscle and blood their distinctive red color. The organic component consists of four pyrrole rings that are linked by methine bridges. In addition, heme is responsible for the red color of the blood and muscle. Oxidation of the iron atom (Fe2+ → Fe3+) is mainly responsible for the color of muscle and blood. At the center of protporphyrin, the iron atom is bonded to nitrogen atoms from four pyrrole rings. The iron atom can form two additional bonds, one on each side of the heme plane. These binding sites are called the fifth and sixth coordination sites. In myoglobin, the fifth coordination site is occupied by the imidazole ring from a histidine residue on the protein. This histidine is referred to as the proximal histidine. The sixth coordination site is available to bind oxygen. The iron atom in deoxymyoglobin lies about four angstroms out of the plane of the protoporphyrin plane because it is too big in that form to fit into the well defined hole. 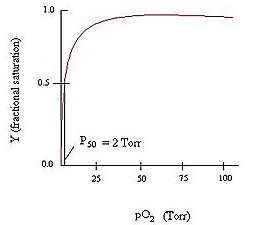 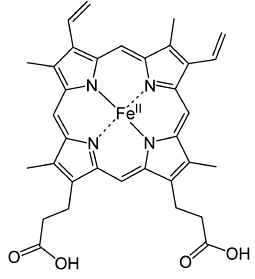 The normal oxidation state of an iron atom has a positive two charge (ferrous ion) instead of three charge (ferric ion) and it is too large to fit into the plane of protoporphyrin. Thus, a ferrous ion is often 0.4 Å away from the porphyrin plane. However, when iron oxidized from ferrous ion (Fe2+) to ferric ion (Fe3+), because the loss of one extra electron, forces between protons and electrons increases so that the electron cloud will penetrate more towards to the nucleus. As a result, the ferric ion (Fe3+) has a smaller size then ferrous ion (Fe2+) and fits into the protoporphyrin plane when it attaches to an oxygen.When oxygen leaves the myoglobin, it leaves as dioxygen rather than superoxide. This is because superoxide can be damaging to many biological process, and in the leaving of super dioxide, the iron ion will be in the ferric state which stops biding oxygen.

Myoglobin is a protein molecule that has a similar structure and function to hemoglobin. It is a smaller monomer of polypeptide structure, a globular protein with amino acids and prosthetic heme group binds to proximal histidine group while a distal histidine group interact on the other side of the plane. It binds and stores oxygen without concerning cooperativity. Most importantly, it is the first protein structure to be studied.Myoglobin follows the Michaelis-Menten Kinetic graph (as seen from the graph above). It follows the Michaelis-Menten kinetics because it is a simple chemical equilibrium.

FunctionThe binding affinities for oxygen between myoglobin and hemoglobin are important factors for their function. Both myoglobin and hemoglobin binds oxygen well when the concentration of oxygen is really high (E.g. in Lung), however, hemoglobin is more likely to release oxygen in areas of low concentration (E.g. in tissues). Since hemoglobin binds oxygen less tightly than myoglobin in muscle tissues, it can effectively transport oxygen throughout the body and deliver it to the cells. Myoglobin, on the other hand, would not be as efficient in transferring oxygen. It does not show the cooperative binding of oxygen because it would take up oxygen and only release in extreme conditions. Myoglobin has a strong affinity for oxygen that allows it to store oxygen in muscle effectively. This is important when the body is starved for oxygen, such as during anaerobic exercise. During that time, carbon dioxide level in blood streams is extremely high and lactic acid concentration build up in muscles. Both of these factors cause myoglobin (and hemoglobins) to release oxygen, for protecting the body tissues from getting damaged under harsh conditions. If the concentration of myoglobin is high within the muscle cells, the organism is able to utilize the oxygen in its lungs for a much longer period of time.Myoglobin, an iron-containing protein in muscle, receives oxygen from the red blood cells and transports it to the mitochondria of muscle cells, where the oxygen is used in cellular respiration to produce energy. Each myoglobin molecule has one heme prosthetic group located in the hydrophobic cleft in the protein. The function of myoglobin is notable from Millikan's review (1) in which he put together an accomplished study to establish that myoglobin is formed adaptively in tissues in response to oxygen needs and that myoglobin contributes to the oxygen supply of these tissues. Oxymyoglobin regulates both oxygen supply and utilization by acting as a scavenger of the bioactive molecule nitric oxide. Nitric oxide is generated continuously in the myocyte. Oxymyoglobin reacts with NO to form harmless nitrates, with concomitant formation of ferric myoglobin, which is recycled through the action of the intracellular enzyme metmyoglobin reductase. Flogel (2) conducted a study that showed how the interaction of NO and oxymyoglobin controls cardiac oxygen utilization.

DiseaseWhen muscle tissue is damaged, very large concentrations of myoglobin enters the kidneys. When this happens, myoglobin is then considered highly toxic and may contribute to acute renal failure. Muscle injury is commonly associated with the release of myoglobin, and is known to be the cause of heart attacks and many other myoalgia. Studies have shown that acute myocardial infarction can be detected with the help of the monitoring of creatin kinase and troponin by electrocardiogram.

Structure and Function of Carbonic AnhydrasesCarbonic anhydrases (CAs, EC 4.2.1.1) catalyse the interconversion between CO2 and bicarbonate as well as other hydrolytic reactions. Among the six genetic families known to date, the α-, β-, γ-, δ-, ζ- and η-CAs, detailed kinetic and X-ray crystallographic studies have allowed a deep understanding of the structure–function relationship in this superfamily of proteins. A metal hydroxide nucleophilic species of the enzyme, and a unique active site architecture, with half of it hydrophilic and the opposing part hydrophobic, allow these enzymes to act as some of the most effective catalysts known in Nature. The CA activation and inhibition mechanisms are also known in detail, with a large number of new inhibitor classes being described in the last years. Apart from the zinc binders, some classes of inhibitors anchor to the metal ion coordinated nucleophile, others occlude the entrance of the active site cavity and more recently, compounds binding outside the active site were described. CA inhibition has therapeutic applications for drugs acting as diuretics, antiepileptics, antiglaucoma, antiobesity and antitumour agents. Targeting such enzymes from pathogens may lead to novel anti-infectives. Successful structure-based drug design campaigns allowed the discovery of highly isoform selective CA inhibitors (CAIs), which may lead to a new generation of drugs targeting these widespread enzymes. The use of CAs in CO2 capture processes for mitigating the global temperature rise has also been investigated more recently.