AC CIRCUIT ANALYSISALTERNATING QUANTITY: An alternating quantity is that which acts in alternate directions and whose magnitude undergoes a definite cycle of changes in definite intervals of time.ALTERNATING VOLTAGE: Alternating voltage may be generated by

CYCLE: A cycle may be defined as one complete set of positive and negative values of an alternating quantity repeating at equal intervals. Each complete cycle is spread over 360° electrical.

PERIODIC TIME: The time taken by an alternating quantity in seconds to trace one complete cycle is called periodic time or time-period. It is usually denoted by symbol T.FREQUENCY: The number of cycles per second is called frequency and is denoted by symbol f.f = 1/TIf the angular velocity w is expressed in radians per second, thenw= 2π/Tw = 2πfPeak Factor: Ratio of maximum value to the RMS value is known as crest or peak.factor or amplitude factor.Peak factor = Maximum Value/RSM ValueForm Factor: Ratio of RMS Value to average value is known as form factor.Form Factor = RMS Value/Average ValuePHASE DIFFERENCE 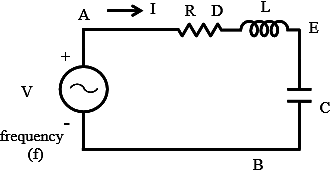 The circuit, with resistance R, inductance L, and a capacitor, C in series is connected to a single-phase variable frequency (f) supply.The total impedance of the circuit isZ∠Φ = R+j(XL-XC)where XL = jwLXC = 1/jwC 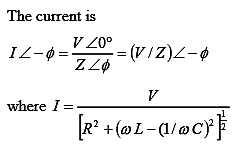 The magnitude of the impedance under the above condition is |Z = R, with the reactance X = 0, as the inductive reactance is equal to capacitive reactance. The phase angle is φ = 0, and the power factor is unity (cos φ= 1), which means that the current is in phase with the input (supply) voltage. So, the magnitude of the current I = V/R.The magnitude of the voltage drop in the inductance L/capacitance C, both are equal as the reactance are equal is⋅= (I.woL = I.1/(woC)Quality Factor  Q = woL/R = 2πfoL/R = 1/R √L/CThe impedance of the circuit with the constant values of inductance L, and capacitance C is minimum at resonant frequency (fo), and increases as the frequency is changed, i.e. increased or decreased, from the above frequency. The current is maximum at f=fo , and decreases as frequency is changed  (f>fo or f<fo) i.e. f≠fo.

PARALLEL RESONANCEThe circuit, with resistance R, inductance L, and a capacitor, C in parallel is connected to a single-phase variable supply frequency (f).

The magnitude of the impedance under the above condition is (|Z|=R), while the magnitude of the admittance is (|Y| = (1/R)= G). The reactive part of the admittance is B =0, as the susceptance (inductive) BL = (1/ωL) is equal to the susceptance (capacitive) BC = ωC. The phase angle is φ = 0, and the power factor is unity (cos φ=1).The input current increases as the frequency are changed, i.e. increased or decreased from the resonant frequency (f>fo or f<fo) i.e.f≠fo.POWER IN AC CIRCUIT We saw in our tutorial about Electric Power that AC circuits which contain resistance and capacitance or resistance and inductance, or both, also contain real power and reactive power. So in order for us to calculate the total power consumed, we need to know the phase difference between the sinusoidal waveform of the voltage and current.

As this is always a positive number the tag ‘leading’ or ‘lagging’ is usually added to describe the phase difference.where P (=VI cosφ )is the Real Power        S(= VI)  is the Apparent Power.Real Power in AC Circuit

The power factor is calculated as the ratio of the real power to the apparent power because this ratio equals cosθ.Power Factor in AC Circuit

the power factor, in this case, will be:Power Factor, pf = cos 90o = 0Which means that the number of watts consumed is zero but there is still a voltage and current supplying the reactive load.

Various methods of power factor improvement are given below;