Light is the energy that enables us to see. Light is emitted from a source such as the Sun.

The material through which the light passes through called a medium.

There are three types of media. They are transparent, translucent and opaque.

Opaque objects: Objects through which we cannot see are called opaque objects. A medium that does not allow light to pass through it is called an opaque medium. Examples of opaque medium are a pencil box, a wooden screen, a book, a towel, a ceramic plate and chart paper.

Translucent media: Objects that allow only a part of the light incident on them to pass through it are called translucent media. Examples of translucent media are a shower stall, smoked glass, sunglasses and butter paper. Light travels in a straight line, and its rays represent the path of light. 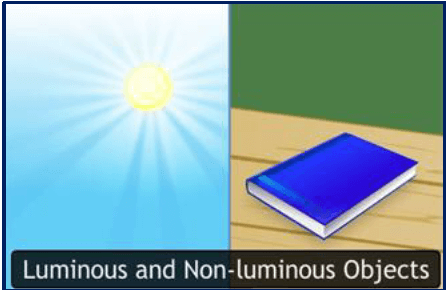 What Exactly are Shadows? 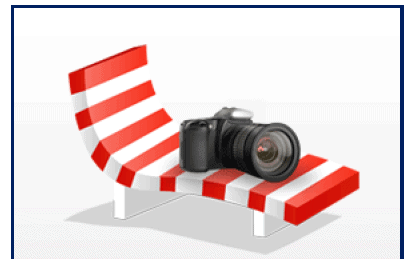 Here, the sun acts as the light source, the earth as the opaque object, and the moon as the screen.

Opaque objects form shadows because light is not able to bend around them. Shadows are seen more clearly on light screens.

Whatever the colour of the object, its shadow is always black because it is not illuminated by light.

The length and shape of a shadow depends on the object by which it is formed.

In the olden days, shadows caused by objects placed in the sun were used to measure time. Such a device is called a sundial. The Jantar Mantar in Jaipur consists of a sundial or Samrat Yantra, which can be used to tell the time, as its shadow moves visibly at one millimetre per second, or roughly six centimetres every minute.

The image formed by a pinhole camera is inverted and smaller in size when compared to the original object. These cameras work on the principle that light travels in a straight line. Pinhole cameras are cheap and simple to make. An eclipse can be viewed using a pinhole camera.

This is the basic structure of the pinhole camera. However, the developed form of a pinhole camera uses photosensitive film instead of translucent paper to capture images. The film can be developed later to obtain photo prints. Nowadays, of course, we use digital cameras that store images in a computer chip. However, the basic principle of capturing the image remains the same.An area that is not or is only partially irradiated or illuminated because of the interception of radiation by an opaque object between the area and the source of radiation is called a shadow. Shadows take the form of the outline of the object that intercepts the light in its path. Thus, the dark outline of the opaque object that you see is a shadow.To form a shadow, we need a source of light, an opaque object in the path of light, and a screen on which a shadow is formed. 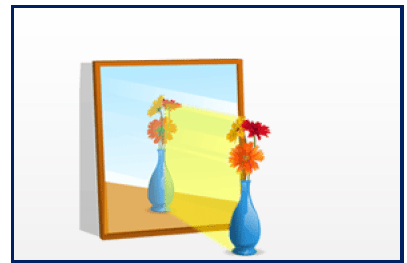 The likeness of an object carried and formed by light in a mirror is called an image. For example, your image is a reflection of your face in the mirror. An image can be seen in the mirror because the light reflected from an object falls on the mirror and it is reflected. So, light incident on any smooth shiny surface like a mirror bounces back into the same medium. This bouncing of light by any smooth surface is called reflection of light. Mirrors change the direction of light incident on them. The image in a plane mirror is the same size and colour as that of the object. Moreover, the distance between the image and the mirror, is the same as the distance between the mirror and the object.

When an opaque object blocks the path of light, a shadow is formed. A shadow is a black dark outline. Its length changes with a change in the position of the source of light. Shadows can be seen only on a surface or a screen.

A glass that acts as a mirror on one side and plain glass on the other is called a two-way mirror. A two-way mirror is used when you want to observe people without letting them know that they are being watched, for example, by police or in psychological institutions.

Images formed by a pinhole camera are entirely different from the images that are formed by a mirror. The image formed by a pinhole camera is inverted and smaller in size when compared to the object. The image is also not clear. Moreover, the distance between the object and the pinhole is not the same as the distance between the pinhole and the image. A periscope is an instrument used for observing objects from a hidden position. This instrument is mostly used in submarines, and works on the concept of reflection in plane mirrors. Using mirrors, it enables people in a submarine to view objects on the surface of the water.

A smooth plane surface that reflects the entire light incident on it is called a plane mirror. Light incident on an object is reflected by that object. That reflected light incidents on the mirror, and is reflected again. It is because of this reflection that we see images. An image is the likeness of an object carried and formed by light in a mirror. In other words, your image is a reflection of your face in the mirror. In ancient times, people mostly used pools of still water, or water collected in a vessel as mirrors. The first man-made mirrors were in the form of a polished stone made by using obsidian, a naturally occurring volcanic glass.The similarity between a shadow and an image is that neither can exist without light. However, there are some differences between shadows and images. Shadows are black, whereas images are colourful. Shadows of objects placed in the sun change in length with the position of the sun through the day. Your shadow will be at its longest at dawn or early morning, and at dusk or early evening, whereas it will be at its shortest at noon. An image in a plane mirror doesn't change in size at all; it is always the same size as that of the object. An image in a mirror can be seen without a screen, whereas it is mandatory to have a screen to form a shadow.