The document Study Notes - Water Class 6 Notes | EduRev is a part of the Class 6 Course Science Class 6.
All you need of Class 6 at this link: Class 6

INTRODUCTIONIt is common knowledge that water is important on our Earth and without water, life as we know it would cease to exist. While Earth has an abundant reservoir of water, covering three-fourths of its surface, Freshwater is a mere 2.6% of the total water. Water is said to be a renewable resource but the rate at which humans and animals are using water, fresh water might be a scarce resource in the recent future. Our body is also made up of 70% water and we use water for a number of reasons from cooking to cleaning and of course drinking it.
Evaporation: The process of conversion of water into its gaseous state i.e. vapours is known as evaporation. The water present on the surface of the ocean evaporates by the sun's heat. The sun warms up the surrounding air as well. Evaporation takes place faster in direct sunlight, than in a shady area. Evaporation also takes place from wet clothes, fields, ponds, lakes and rivers. A variety of salts, like sodium chloride, calcium, magnesium and potassium, are left behind during the process of evaporation.
Condensation: The process of conversion of vapours into water is referred to as condensation. 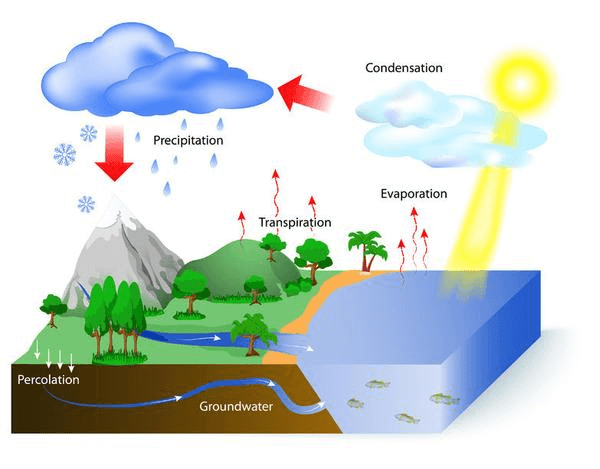 Fig: Water Cycle
Water cycle is defined as the process through which water gets evaporated from open surfaces like oceans and seas, gets condensed as it rises in cool atmosphere and ultimately pours down as rain back into oceans, lakes, rivers and ponds.

Plants take in water to grow as well as to prepare their food. They retain the water they need and release the excess water into the air as water vapour through the stomata of the leaves and the stem. This process is called transpiration.Thus, water is mainly evapo-transpirated to the air from land, water bodies and plants. The evaporated water is carried away by warm air. As the warm air moves higher from the surface of the Earth, it starts to cool down. It is because the water vapour present starts to condense to form tiny water droplets.

These droplets float in the air and form cloud and fog. All these droplets collect to form bigger drops of water. Some of them may become too heavy to remain in the sky and fall down as rain. This process is known as precipitation. If the air is too cold, the water drops can become snow or hail and may settle on the top of a mountain. When these snow or hail melts, they can become part of a river or a stream.
Thus, the water that is evaporated from the oceans or seas is again condensed to form water and fills up the rivers and seas. Rain water also seeps into the ground to form ground water. Thus, water cycle is a continuous process.
Uses of Water

Water is used in our day to day life. Water is used for everyday needs such as brushing, bathing, washing, cleaning etc. Farmers use ground water to water their fields.

Many industries use ground water to produce everything from paints and fabric to leather and chemicals. So ground water is used for many purposes. Moreover the decline in the number of trees, excess usage of water and the presence of concrete in the areas does not allow the rain water to seep into the ground which is the reason for the shortage of water.EFFECTS OF RAINFALL
Droughts: Due to lack of rains the wells, lakes, ponds get dried up and thereby creating water scarcity and as result droughts are possible. If there are no rains, then the soil becomes more dry and patchy. Droughts occur when there are no rains for a longer period of time. There is less rainfall because trees are cut down. Fig: Dried fields as a result of droughts
Droughts results in drying up of the crops and vegetation and this effects the availability of food for villages and food for the other animals. Finally this leads to malnutrition in humans.
Floods: Due to heavy rainfall the water levels in ponds, lakes rises to a greater extend and the rise in the water level of these water bodies causes the excess water to spread across causing floods. Fig: FloodsFloods wash out the living beings such as fish and other animals etc. and they create great havoc to the mankind. Once the rains stops the flood water receded, fish, cattle and other animals were left dead. Floods cause lot of harm to the living beings and there will be loss in property also.
Rain Harvesting: Harvesting is a method to collect rain water and store the rain water. The purpose of harvesting rain water is that two thirds of the earth is covered with water. Ocean and sea water contains many dissolved salts and cannot be used for drinking, agriculture and domestic purposes. So constant use of ground water results in scarcity of groundwater. So rain harvesting clears the problem of depleting the ground water. 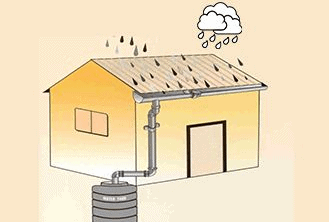 Fig: Rainwater harvestingTechnique involved in rain harvesting:
First collect the rain water at the rooftop and then allow the rain water to travels through the pipes or drains and then attach a wire mesh to the mouth pipe which filters large fragments such as leaves etc. This water is transported to the water tanks. These tanks contain layers of sand, gravel, charcoal that will filter the dirt and other impurities from rain water.
Advantages of Rainwater Harvesting:The benefits of rainwater harvesting system are listed below.