What is Gear Train? 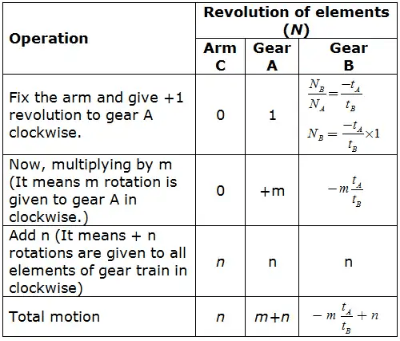 On the basis of given condition, we can determine the values m and n. For example, if gear A is at rust, thenNA = 0∴ m + n = 0  ....(i)and arm is given +k revolution, thenn = k …(ii)By solving Equations: (i) and (ii), we can find the values of m and n. Once we find out m and n then number of revolutions and direction of gear B can be determined as:

Try yourself:When the axes of first and last gear are co-axial, then gear train is known as
Explanation

When the axes of the first gear (i.e. first driver) and the last gear (i.e. last driven or follower) are co-axial, then the gear train is known as reverted gear train.
When there are more than one gear on a shaft, as shown in Fig. 13.2, it is called a compound train.