The document Subjective Questions of Current Electricity, Past year Questions JEE Advance, Class 12, Physics JEE Notes | EduRev is a part of the JEE Course Class 12 Physics 35 Years JEE Mains &Advance Past year Paper.
All you need of JEE at this link: JEE

Solutions. The resistance of the heater is

The power on which it operates is 62.5 W

This current divides into two parts. Let I1 be the current that passes through the heater. Therefore

Thus current through R is 5A.

Q.2. If a copper wire is stretched to make it 0.1% longer what is the percentage change in its resistance? Let the initial length of the wire be 100 cm, then the new

Let Ai and Af be the initial and final area of cross-section.

Thus the resistance increases by 0.2%.

Q.3. All resistances in the diagram below are in ohms. Find the effective resistance between the points A and B. 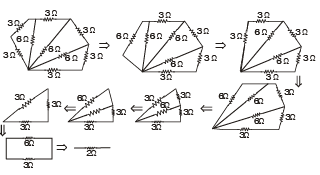 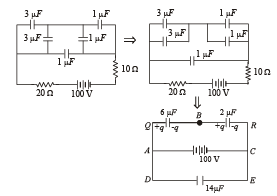 Q.5. A battery of emf 2 volts and internal resistance 0.1 ohm is being charged with a current of 5 amps.  In what direction will the current flow inside the battery?What is the potential difference between the two terminal of the battery?

Solution.  NOTE : The current will flow from the positive terminal to the negative terminal inside the battery.

As the voltmeter is in the parallel with the 400Ω resistance, their combined resistance is

which gives R = 1200Ω, is the resistance of the voltmeter.

When the voltmeter is connected across the 300Ω resistance, their combined resistance is

∴  Current in the circuit is

(i) Find the potential difference between the points A and B and the currents through each branch.

(ii) If r2 is short circuited and the point A is connected to point B, find the currents through E1, E2 E3 and the resistor R

Applying Kirchoff's law in URSTU starting from U moving clockwise

NOTE : The – ve sign of I3 indicates that the direction of current in branch UTSR is opposite to that assumed.

Applying Kirchoff's law in  AURBA starting from A moving clockwise.

Q.8. Calculate the steady state current in the 2-ohm resistor shown in the circuit in the figure. The internal resistance of the battery is negligible and the capacitance of the condenser C is 0.2 microfarad. 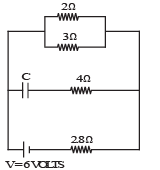 Total current through the battery

Calculate : (i) the potential difference between  B and D and

Solution. Let I2 current flow through the branch DCB

∴ By Kirchoff's junction law, current in branch DB will be I2 – I1 as shown in the figure. 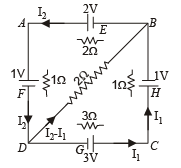 Applying Kirchoff's law in loop BCDB, we get

[∴cell is in charging mode]

Q.10.A part of ciucuit in a steady state along with the currents flowing in the branches, the values of resistances etc., is shown in the figure. Calculate the energy stored in the capacitor C (4µF) 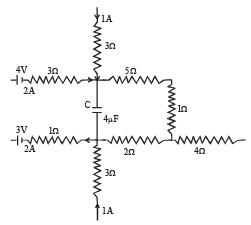 Solution. Applying Kirchoff's first law at junction M, we get the current i1 = 3A 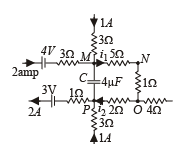 Applying Kirchoff's first law at junction P, we get current i2 = 1A

NOTE : No current flows through capacitor at steady state.

Moving the loop along MNO to P

Energy stored in the capacitor

Q.11.  An infinite ladder network of resistances is constructed with a1 ohm and 2 ohm resistances, as shown in fig.

This resistance Req can be taken as R because if we add one identical item to infinite items then the result will almost be the same.

Find the current in R3 and the energy stored in the capacitor. 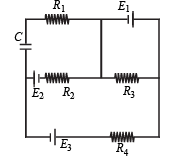 Substituting this value in (i), we get

To find the p.d. across the capacitor

Q.13. An electrical circuit is shown in Fig. Calculate the potential difference across the resistor of 400 ohm, as will be measured by the voltmeter V of resistance 400 ohm, either by applying Kirchhoff’s rules or otherwise. 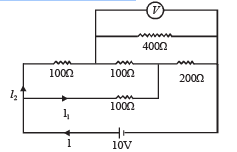 Solution.We can redraw the circuit as. 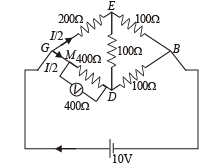 The equivalent resistance between G and D is

∴ It is a case of balanced wheatstone bridge.

The equivalent resistance across G and B is

NOTE : Since RGEB = RGDB  the current is divided at G into two equal parts

The current I/2 further divides into two equal parts at M.Therefore the potential difference across the voltmeter

Q.14.In the circuit shown in Figure, the battery is an ideal one, with emf V. The capacitor is initially uncharged. The switch S is closed at time t = 0.

Solution. Let at any time t charge on capacitor C be Q. Let currents are as shown in fig. Since charge Q will increase with time 't' therefore i1 = dQ/dt

(a) Applying Kirchoff's second law in the loop MNABM

Similarly, applying Kirchoff's second law in loop MNSTM, we have

Q.15. A thin uniform wire AB of length 1m, an unknown resistance X and a resistance of 12 Ω are connected by thick conducting strips, as shown in the figure. A battery and a galvanometer (with a sliding jockey connected to it) are also available. Connections are to be made to measure the unknown resistance X using the principle of Wheatstone bridge. Answer the following questions.

(a) Are there positive and negative terminals on the galvanometer? (b) Copy the figure in your answer book and show the battery and the galvanometer (with jockey) connected at appropriate points.

Solution.(a) No. There are no positive and negative terminals on the galvanometer.

NOTE : Whenever there is no current, the pointer of the galvanometer is at zero. The pointer swings on both side of zero depending on the direction of current.

where r is the resistance per unit length.

Q.16. How a battery is to be connected so that the shown rheostat will behave like a potential divider? Also indicate the points about which output can be taken.

Solution. Battery should be connected across A and B. Output can be taken across the terminals A and C or B and C.

Q.17. Draw the circuit diagram to verify Ohm’s Law with the help of a main resistance of 100 W and two galvanometers of resistances 106 W and 10–3 W an d a source of varying emf.Show the correct positions of voltmeter and ammeter.

Solution. For the experimental verification of Ohm's law, ammeter and voltmeter should be connected as shown in the figure.

A voltmeter is a high resistance galvanometer (106Ω) which is connected in parallel with the main resistance of 100Ω.

An ammeter is a low resistance galvanometer (10–3Ω) which is connected in parallel with the main resistance.

Q.18. An unknown resistance X is to be deter m in ed using resistances R1, R2 or R3. Their corresponding null points are A, B and C. Find which of the above will give the most accurate reading and why?

Solution. KEY CONEPT : At all null points the wheatstone bridge will be balanced 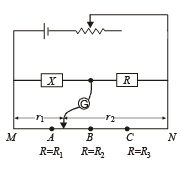 where R is a constant r1 and r2 are variable.

The maximum fractional error is