1. An organic liquid (A), containing C, H and O with boiling point : 78°C, and possessing a rather pleasant odour, on heating with concentrated sulphuric acid gives a gaseous product (B) – with the empirical formula, CH2. ‘B’ decolourises bromine water as well as alkaline KMnO4 solution and takes up one mole of H2 (per mole of ‘B’) in the presence of finely divided nickel at high temperature. Identify the substances ‘A’ and ‘B’.   (1979)

2. A compound (X) containing C, H and O is unreactive towards sodium. It does not add bromine. It also does not react with Schiff’s reagent. On refluxing with an excess of hydriodic acid, (X) yields only one organic product (Y). On hydrolysis, (Y) yields a new compound (Z) which can be converted into (Y) by reaction with red phosphorus and iodine. The compound (Z) on oxidation with potassium permanganate gives a carboxylic acid. The equivalent weight of this acid is 60. What are the compounds (X), (Y) and (Z)? Write chemical equations leading to the conversion of (X) to (Y). (1981 - 3 Marks)

Since the carboxylic acid has equivalent weight of 60, it must be acetic acid (CH3COOH), hence Z must be ethyl alcohol, (Y) ethyl iodide and (X) diethyl ether.

4. State with balanced equations what happens when : (i) acetic anhydride reacts with phenol in presence of a base. (1982 - 1 Mark) (ii) Ethylene glycol is obtained by the reaction of ethylene with potassium permanganate. (1991 - 1 Mark)

Solution : (i) Ethanol (due to the presence of active hydrogen atom, C2H5 – O – H) reacts with sodium metal, while ether and benzene have no such hydrogen atom and hencedo not react with sodium and thus can be dried by metallic sodium.(ii) Phenol (a weaker acid) reacts with NaHCO3 (a weaker base) to form phenoxide ion (a stronger base) and carbonic acid (a stronger acid).

Since acid-base equilibria lie towards the weaker acid and weaker base, phenol does not decompose NaHCO3(difference from carboxylic acids).

(iii) Since 3º carbocation (formed in case of t-butanol) is more stable than 1º (formed in n-butanol), the dehydration in the former proceeds faster than in thelatter.

6. An alcohol A, when heated with conc. H2SO4 gives an alkene B. When B is bubbled through bromine water and the product obtained is dehydrohalogenated with excess of sodamide, a new compound C is obtained. The compound C gives D when treated with warm dilute H2SO4 in presence of HgSO4. D can also be obtained either by oxidizing A with KMnO4 or from acetic acid through its calcium salt. Identify A, B, C and D. (1983 - 4 Marks)

Solution :  The given problem can be sketched as below.

NOTE THIS STEP : From the problem it appears that the compound C is an alkyne, hence D must be an aldehyde or ketone. Further since D can be obtained from acetic acidthrough its calcium salt it may be either acetaldehyde or acetone. Hence going back, A may be either ethyl alcohol or iso-propanol both of which explains the given set ofreactions.

7. A compound of molecular formula C7H8O is insoluble in water and dilute sodium bicarbonate but dissolves in dilute aqueous sodium hydroxide. On treatment with bromine water, it readily gives a precipitate of C7H5OBr3. Write down the structure of the compound. (1985 - 2 Marks)

Solution: (i) The compound (C7H8O) is soluble in aq. NaOH but insoluble in NaHCO3, indicating it to have a phenolic group.(ii) The compound, on treatment with Br2 water, gives C7H5OBr3. Taking into account of molecular formulae of the two compounds, the parent compound seems tobe cresol.

(iii) Bromination of the compound reveals that it is m-cresol as it forms tribromo derivative.(iv) The reactions are 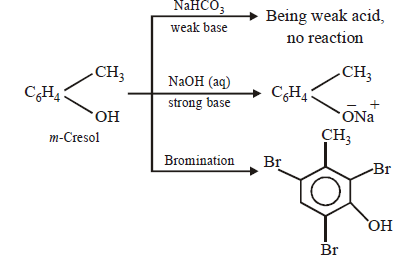 8. Give a chemical test/suggest a reagent to distinguish between methanol and ethanol. (1985 - 1 Mark)

Solution : TIPS/Formulae :Iodoform test is used to distinguish methanol and ethanol. Ethanol gives iodoform test while methanol does not respond.

9. Complete the following with appropriate structures :

10. Compound ‘X’ (molecular formula, C5H8O) does not react appreciably with Lucas reagent at room temperature but gives a precipitate with ammonical silver nitrate. With excess of MeMgBr, 0.42 g of ‘X’ gives 224 ml of CH4 at STP. Treatment of ‘X’ with H2 in presence of Pt catalyst followed by boiling with excess HI, gives n-pentane. Suggest structure for ‘X’ and write the equation involved.                 (1992 - 5 Marks)

The above structure for the compound X is in accordance with its equivalent weight obtained from the given data.224 ml. of CH4 at STP is obtained from 0.42 g

11. When t-butanol and n-butanol are separately treated with a few drops of dilute KMnO4, in one case only the purple colour disappears and a brown precipitate is formed. Which of the two alcohols gives the above reaction and what is the brown precipitate? (1994 - 2 Marks)

The brown precipitate is of MnO2

12. When phenol is reacted with CHCl3 and NaOH followed by acidification, salicylaldehyde is obtained. Which of the following species are involved in the above mentioned reaction as intermediates? (1995 - 2 Marks)

Solution :TIPS/Formulae :The reaction involves electrophilic substitution on the highly reactive phenoxide ion.Here the electrophile is dichlorocarbene formed by the action of strong alkali on chloroform.