13. 3,3-Dimethylbutan-2-ol loses a molecule of water in the presence of concentrated sulphuric acid to give tetramethylethylene as a major product. Suggest a suitable mechanism. (1996 - 2 Marks)

Solution : The steps involved in the suggested mechanism are as follows.(a) The protonation of hydroxyl group.

(d) The removal of H+ to form a double bond

14. A compound D (C8H10O) upon treatment with alkaline solution of iodine gives a yellow precipitate. The filtrate on acidification gives a white solid E (C7H6O2). Write the structures of D and E and explain the formation of E.       (1996 - 2 Marks)

NOTE :The reaction of D (C8H10O ) with alkaline solution of iodine is an iodoform reaction. This reaction is possible if the compound D has

The high carbon content in D indicates that D is an aromatic compound containing a benzene ring. To account for the given formula, the compound D may be C6H5CH(OH)CH3

The given reactions are 15. An optically active alcohol A (C6H10O) absorbs two moles of hydrogen per mole of A upon catalytic hydrogenation and gives a product B. The compound B is resistant to oxidation by CrO3 and does not show any optical activity. Deduce the structures of A and B. (1996 - 2 Marks)

Solution : TIPS/Formulae :(a) Since (B) is resistant to oxidation, it must be ter-alcohol.(b) Since (B) is optically inactive, it must have at least two  alkyl groups similar.

Thus the five carbon atoms can be adjusted into three alkyl groups (of which two are similar) either as –CH3, –CH3, and –C3H7, or as –C2H5, –C2H5 and –CH3,Thus the possible structure of alcohol (B) is either

Hence the corresponding compound (A) is either

However, the compound (A) is optically active, so (A) and hence also (B) should have right side structure. 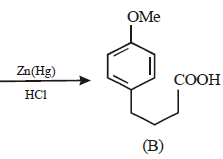 TIPS/Formulae :The oxirane ring is cleaved via SN2 mechanism

The method given in (ii) is the correct method for the formation of ether because method (i) leads alkene as the main product.NOTE :3° alkyl halides are easily dehydrohalogenated by base.

19. Write the intermediate steps for each of the following reaction.

20. Explain briefly the formation of the products giving the structures of the intermediates. (1999 - 3 Marks)

(i) NOTE :Since the large propenyl group is attached to the carbon atom bearing the hydroxyl group, so the reaction is likely to occur via SN1 mechanism.

21. A biologically active compound, bombykol (C16H30O) is obtained from a natural source. The structure of the compound is determined by the following reactions. (2002 - 5 Marks)

(a) On hydrogenation, bombykol gives a compound A, C16H34O, which reacts with acetic anhydride to give an ester; (b) Bombykol also reacts with acetic anhydride to give another ester, which on oxidative ozonolysis (O3/H2O2) gives a mixture of butanoic acid, oxalic acid and 10- acetoxydecanoic acid. Determine the number of double bonds in bombykol. Write the structures of compound A and bombykol. How many geometrical isomers are possible for bombykol?

TIPS/Formulae :Let us summarise the given facts.

(i) Molecular formula of P, C5H10O indicates 1º of unsaturation. So it should have double bond.(ii) Acidic hydrolysis of P to Q and R, both of which responds iodoform test, indicates that Q and R should have following structure.CH3CH2OH, (CH3)2CHOH, CH3CHO or CH3CORThe only possible linkage that can explain such hydrolysis is ether. Hence P should have following type of structure.C2 – Component – O – C3 – ComponentFurther either the C2 – or the C3 – component should have double bond, thus the possible structure for P should be either of the following two structures which explains all thegiven reactions.

Extra reactivity of P toward dil. H2SO4 than ethylene is due to formation of highly stable carbocation