Q.31. Suggest appopriate structures for the missing compounds. (The number of carbon atoms remains the same throughout the reactions.)      (1996 - 3 Marks)

Q.33. An aldehyde A (C11H8O), which does not undergo self aldol condensation, gives benzaldehyde and two moles of B on ozonolysis. Compound B, on oxidation with silver ion gives oxalic acid. Identify the compounds A and B.  (1998 -  2 Marks)

Following informations are provided by the problem.

(i) Sin ce al deh yde A (C11H8O) gives C6H5CHO on ozonolysis, it must have a benzene nucleus and a side chain. The side chain should have five carbon (C11–C6 =C5), three hydrogen (H8-H5=H3) and one oxygen atom, i.e., it should be C5H3O. Further the compound A has an aldehydic group, so the side chain can be written as C4H2CHO.(ii) Formation of two moles of B from one mole of A by ozonolysis indicates that the side chain must possess two unsaturated linkages, one of which must be alkyne type, suggested by very low number of hydrogen atoms.(iii) Further since the aldehyde A does not undergo aldol condensation, a -hydrogen is absent and hence triple bond should be present between C2 and C3.(iv) Thus the side chain C4H2CHO of A can be written as – CH = CH – C ≡ C – CHO.(v) Thus compound A should possess following structure which explains all the given reactions. 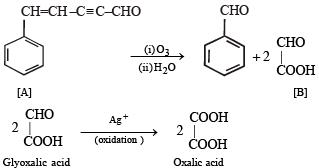 Q. 37. Explain briefly the formation of the products giving the structures of the intermediates.

The given reaction can be summarised as below :

Conclusions from the set of reactions

(ii) Reaction of A with CH3MgBr indicates that it should have a ketonic group.

(iii) As B undergoes ozonolysis to form C, It must have a double bond, and C must have two carbonyl groups.

(iv) Reaction of C (a dicarbonyl compound) with a base gives a cyclic compound, it indicates that intramolecular condensation have occurred during this conversion.Thus A is cyclohexanone which explains all the given reactions.

Q.41. Identify (X), (Y) and (Z) in the following synthetic scheme and write their structures.

Explain the formation of labelled formaldehyde (H2C*O) as one of the products when compound (Z) is treated with HBr and subsequently ozonolysed. Mark the C* carbon in the entire scheme.

Q.42. Five isomeric para-disubstituted aromatic compounds A to E with molecular formula C8H8O2 were given for identification. Based on the following observations, give structures of the compounds.               (2002 - 5 Marks)

(i) Both A and B form a silver mirror with Tollen’s reagent; also B gives a positive test with FeCl3 solution. (ii) C gives positive iodoform test. (iii) D is readily extracted in aqueous NaHCO3 solution. (iv) E on acid hydrolysis gives 1,4-dihydroxybenzene.

Q.43. Identify X, Y and Z in the following synthetic scheme and write their structures.

Is the compound Z optically active? 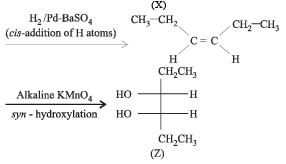 Solution. The two enantiomers of 2-phenylpropan oic acid in the racemic mixture  react with (+) –  alcohol to form two diastereomers. 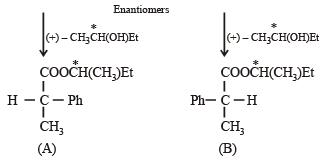 The enolic form of the compound is more stable than the keto form due to hydrogen bonding.

Q.46. A monomer of a polymer on ozonolysis gives two moles of CH2O and one mole of CH3COCHO. Write the structure of monomer and write all – ‘cis’ configuration of polymer chain.

Thus the possible polymer should be

Structure of all cis configuration of the polymer.