Solution. Summarise the given facts.

From the above set, following conclusions can be drawn.

(ii) Compound E on treatment with alkali followed by acidification gives a white solid compound (G), C7H6O2.Thus (G) seems to be an acid, hence it is C6H5COOH.

(iii) Since (D) and (E) are isomers of the formula C8H9NO, and give C6H5NH2 and C6H5COOH respectively, both should be amides having different alkyl or aryl group.Thus (D) should be C6H5NHCOCH3,  and (E) must be CH3NHCOC6H5.

Q.17. How would you synthesise 4–methoxyphenol from bromobenzene in NOT more than five steps? State clearly the reagents used in each step and show the structures of the intermediate compounds in your synthetic scheme.                    (2001 - 5 Marks)

Q.19. There is a solution of p–hydroxybenzoic acid and p-aminobenzoic acid. Discuss one method by which we can separate them and also write down the confirmatory tests of the functional groups present.           (2003 - 4 Marks). 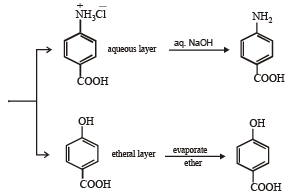