Q.13. A circular ring of radius R with uniform positive charge density λ per unit length is located in the y-z plane with its centre at the origin O. A particle of mass m and positive charge q is projected from the point P (R√ 3,0,0) on the positive x-axis directly towards O, with an initial speed v.

Solution. Potential energy can be found at the initial point A and final point O. The difference in potential energy has to be provided by the K.E. of the charge at A. The kinetic energy of the charged particle is converted into its potential energy at O.

For minimum speed of particle so that it does not return to P,

Solution. The adjacent figure is a case of parallel plate capacitor. The combined capacitance will be

Differentiating the above quation w.r.t. time

Q.15. The capacitance of a parallel plate capacitor with plate area A and separation d is C. The space between the plates is filled with two wedges of dielectric constants K1 and K2, respectively. Find the capacitance of the resulting capacitor.       (1996 - 2 Marks)

Solution. Case (i) When no dielectric :

Case (ii) When dielectric is filled : A small dotted element of thickness dx is considered as shown in the figure.

The small capacitance of the dotted portion

capacitance of capacitor with dielectric K1

Let ℓ, b the len gth an d br eadth of the capacitor plate.

To find the capacitance of the whole capacitor, we integrate the above equation.

Q.16. Two capacitors A and B with capacities 3 μF and 2 μF are charged to a potential difference of 100 V and 180 V respectively. The plates of the capacitors are connected as shown in the figure with one wire from each capacitor free.

The upper plate of A is positive and that of B is negative. An uncharged 2 μF capacitor C with lead wires falls on the free ends to complete the circuit. Calculate         (1997 - 5 Marks)

(i) the final charge on the three capacitors. and (ii) the amount of electrostatic energy stored in the system before and after the completion of the circuit.

Solution. (i) KEY CONCEPT : Use charge conservation to solve this problem.

Charge on capacitor A

Charge on capacitor B

Let the charge on capacitor A, C and B be q1, q2 and q3 respectively.

Applying  Kirchoff's law in the closed loop, we get

(ii) Amount of electrostatic energy in the system initially

(a) Find the electrostatic energy of S2 after n such contacts with S1.(b) What is the limiting value of this energy as n →∞ ?

Let us calculate qn when n tends to ∞. Q.18. A non-conducting disc of radius a and uniform positive surface charge density σ is placed on the ground, with its axis vertical. A particle of mass m and  positive charge q is dropped, along the axis of  the disc, from a height H with zero initial velocity. The particle has q/m = 4 ∈0g/σ    (1999 - 10 Marks)

(a) Find the value of H if the particle just reaches the disc. (b) Sketch the potential energy of the particle as a function of its height and find its equilibrium position

Solution. (a) KEY CONCEPT :  The K.E. of the particle, when it reaches the disc is zero.

Potential due to a charged disc at any axial point situated at a distance x from O is,

From the given relation

Putting this in equation (1), we get,

(b) Total potential energy of the particle at height H

From equation (2), graph between U(x) and x is as shown above. respectively on the y-axis. A particle of mass 6 × 10–4 kg and charge +0.1 μC moves along the -x direction. Its speed at x = + ∞ is V0. Find the least value of V0 for which the particle will cross the origin. Find also the kinetic energy of the particle at the origin. Assume that space is gravity free.

Solution. Let the particle at some instant be at a point P distant x from the origin. As shown in the figure, there are two forces of repulsion acting due to two charges of + 8 mC. The net force is 2F cos α towards right.

Similarly there are two forces of attraction due to two charges of – 1 mC. The net force due to these force is 2F' cos β towards left. 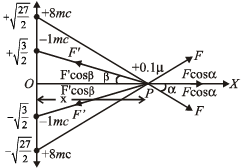 This means that we need to move the charge from – ∞ to

Thereafter the attractive forces will make the charge move to origin.

The electric potential of the four charges at

Kinetic energy is required to overcome the force of repulsion

K.E. at the origin

Q.21. A charge +Q is fixed at the origin of the co-ordinate system while a small electric dipole of dipole moment

(b) Calculate the force on the charge +Q at this moment.

Solution. (a) Potential energy of the dipole-charge system

(b) Electric field at origin due to dipole

Thus, force on charge Q is given by

Solution. LIQUID BUBBLE : The potential of the liquid bubble is V.

where q is the charge on the liquid bubble.

The volume of liquid droplet = Volume (of the liquid)   in liquid bubble.

(Q t is very small as compared to a)