1. (a) Show by chemical equations only, how you would prepare the following from the indicated starting materials. Specify the reagents in each step of the synthesis. (i) Hexachlorethane, C2Cl6, from calcium carbide. (ii) Chloroform from carbon disulphide. (b) Give one chemical test which would distinguish between C2H5OH from CHCl3.           (1979) Solution : (a)

carbocations are formed on addition of HBr on C6H5CH=CHCH3, the latter being benzylic carbocation,is stabilised due to resonance and hence Br– adds on it forming C6H5CHBr.CH2CH3 as the final product.]

(ii) NOTE : The former halide is a 3° halide, hence it undergoes SN1 reaction forming HBr, as one of the products, which make solution acidic

is an aryl halide so it does not undergo nucleophilic substitution reactions. Hence the solution will remain neutral.

4. State the conditions under which the following preparation are carried out. Give the necessary equations which need not be balanced : (i) Lead tetraethyl from sodium-lead alloy  (1983 - 1 Mark) (ii) Methyl chloride from aluminium carbide   (1983 - 1 Mark) solution : (i) 4C2H5Br + 4(Na–Pb)

5. Write the structure of all the possible isomers of dichloroethene. Which of them will have zero dipole moment?     (1985 - 2 Marks) Solution : Dichloroethene exists in three isomeric forms.

6. What happens when excess chlorine is passed through boiling toluene in the presence of sunlight?(1987 - 1 Mark) Solution :

7. What effect should the following resonance of vinyl chloride have on its dipole moment? (1987 - 1 Mark)

8. An organic compound X, on analysis gives 24.24 per cent carbon and 4.04 per cent hydrogen. Further, sodium extract of 1.0 g of X gives 2.90 g of silver chloride with acidified silver nitrate solution. The compound X may be represented by two isomeric structures, Y and Z. Y on treatment with aqueous potassium hydroxide solution gives a dihydroxy compound while Z on similar treatment gives ethanal. Find out the molecular formula of X and give the structures of Y and Z. (1989 - 4 Marks)Solution :

∴ Empirical formula of (X) is CH2ClSince X has two isomers Y and Z; both react with KOH(aq).

CH3CHO i.e. Z should have 2Cl atoms on one C atomThus Z should be CH3CHCl2 (1, 1-dichlorethane) andY should CH2ClCH2Cl (1, 2-dichloroethane)

9. Draw the stereochemical structures of the products in the following reaction : (1994 - 4 Marks)

Solution : Summary of the given facts

The two isomeric precursors of  (Y and Z) of 2, 3-dimethylbutane 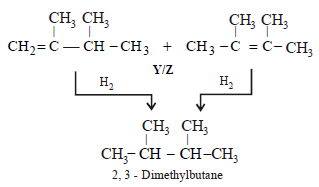 12. Cyclobutyl bromide on treatment with magnesium in dry ether forms an organometallic (A). The organometallic reacts with ethanal to give an alcohol (B) after mild acidification. Prolonged treatment of alcohol (B) with an equivalent amount of HBr gives 1–bromo–1–methylcyclopentane (C). Write the structures of (A), (B) and explain how (C) is obtained from (B).             (2001 - 5 Marks)