Solution. The reaction involved in a-decay is

Mean life is given as tmean

Of these distintegrations, 8% are in fission and 92% are in a-decay. 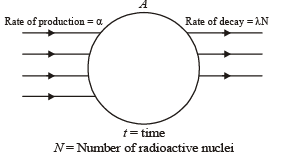 (a) Let at time ‘t’ number of radioactive nuclei are N.

Net rate of formation of nuclei of A.

Solving this equation, we get

Q.21. Photoelectrons are emitted when 40 nm radiation is incident on a surface of work function 1.9 eV. These photoelectrons pass through a region containing α-particles. A maximum energy electron combines with an α–particle to form a He+ ion, emitting a single photon in this process. He+ ions thus formed are in their fourth excited state. Find the energies in eV of the photons, lying in the 2 to 4 eV range, that are likely to be emitted during and after the combination. [Take h = 4.14×10–15 eV.s.]          (1999 - 5 Marks)

Solution. The energy of the incident photon is

It is given that,

The fourth excited state implies  that the electron enters in the n = 5 state.

In this state its energy is

Note : After the recombination reaction, the electron may undergo transition from a higher level to a lower level thereby emitting photons.

The energies in the electronic levels of He+ are

Q.22. A hydrogen-like atom of atomic number Z is in an excited state of quantum number 2n. It can emit a maximum energy photon of 204 eV. If it makes a transition to quantum state n, a photon of energy 40.8 eV is emitted. Find n, Z and the ground state energy (in eV) for this atom. Also calculate the minimum energy (in eV) that can be emitted by this atom during de-excitation. Ground state energy of hydrogen atom is –13.6 eV.         (2000 - 6  Marks)

Solution. Energy for an orbit of hydrogen like atoms is

For transition from 2n orbit to 1 orbit

For minimum energy = Transition from 4 to 3.

No. of photons incident per second

As 0.53% of incident photon can eject photoelectrons

∴ No. of photoelectrons ejected per second

Solution. The formula for η of power will be

Energy required for this power is given by

Solution. Let the reaction be

The mass of the parent nucleus X will be

The rate of equation for the population of X, Y and Z will be

⇒ On integration, we get

To determine the maximum NY, we find 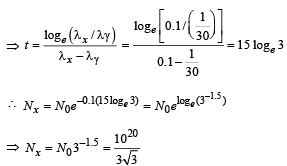 (a) Find the atomic number of the atom. (b) Calculate the smallest wavelength emitted in th ese transitions.

(b) Smallest wavelength λ is given by

Q.28. Two metallic plates A an d B, each of area 5 × 10–4 m2, are placed parallel to each other at a separation of 1 cm. Plate B carries a positive charge of 33.7 × 10–12 C. A monochromatic beam of light, with photons of energy 5 eV each, starts falling on plate A at t = 0 so that 1016 photons fall on it per square meter per second. Assume that one photoelectron is emitted for every 106 incident photons. Also assume that all the emitted photoelectrons are collected by plate B and the work function of plate A remains constant at the value 2eV. Determine         (2002 - 5 Marks)

(a) the number of photoelectrons emitted up to t = 10 s,(b) the magnitude of the electric field between the plates A and B at t = 10 s, and (c) the kinetic energy of the most energetic photoelectron emitted at t = 10 s when it reaches plate B.

Neglect the time taken by the photoelectron to reach plate B.

(c) K.E. of most energetic particles

Solution. According to Bohr ’s model, the energy released during transition from n2 to n1 is given by

For transition from L shell to K shell

(b) Note : When the intensity is doubled, the saturation current is also doubled. The wavelength λ, of photon for different lines of Balmer series is given by

Q.34. The potential energy of a particle of mass m is given by

Solution. The de Broglie wave length is given by

For this, potential energy is E0 (given)

For this, potential energy = 0 (given)

Solution. (a) KEY CONCEPT : We know that radius of nucleus is given by formula

Also we know that when electron jumps from (n + 1)th orbit to 1st orbit. 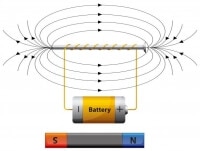