Q.1. Arrange the following in :

(i) Increasing reactivity towards HCN

(ii) Give the IUPAC name of the following compound :

(iii) Write the IUPAC name for the following :

Q.4. Give reasons for the following :

(ii) Phenyl group is known to exert negative inductive effect. But each phenyl ring in biphenyl (C6H5 – C6H5) is more reactive than benzene towards electrophilic substitution .

(i) In formic acid, resonance is not possible with the result there are two types of C – O bonds. In sodium formate, resonance is possible, so both of the C – O bonds have same bond length.

(ii) In biphenyl, one of the phenyl groups acts as electron donor and the other electron acceptor due to mesomeric effect. This makes it more reactive than benzene.

(iii) The low reactivity of halogen atom in aryl and vinyl halides towards nucleophiles is due to resonance. 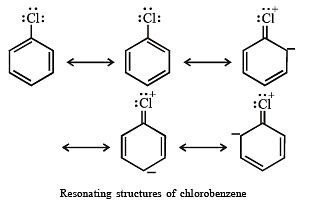 (iv) CH ≡ C–, C– is sp hybridised and more electronegative then the

Q.7. Write down the structures of the stereoisomers formed when cis-2-butene is reacted with bromine.

Q.8. Discuss the hybridisation of carbon atoms in allene (C3H4) and show the π-orbital overlaps.

Q.9. Identify the pairs of enantiomers and diastereomers from the following compounds I, II and III

Q.10. Which one is more soluble in diethyl ether - anhydrous AlCl3 or hydrous AlCl3? Explain in terms of bonding.

Diethyl ether acts as a lewis base and anhydrous AlCl3 as a lewis acid.

Solution. NOTE : Higher the Ka value, more stronger is the acid. Correct order of acidic strength of the given acids is

Hence the  Ka values of the five acids will be in the order.

Write resonance structure of the given compound.

Q.13. Which of the following is more acidic and why ?

Solution. Presence of an electron-attracting group increases acidity of the compound. Thus

Draw all the stable conformers of Z – CH2 – CH2 – Z and calculate the value of μ(Gauche).

Given, mole fraction of anti conformer = 0.82