Let L be the line parallel to side AB of ΔABC, at a distance of 2 cm from AB, in which the first reflection ΔA' B' C' is obtained. 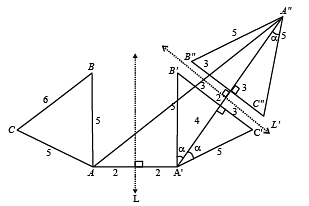 Q. 2. (a) If a circle is inscribed in a right angled triangle ABC with the right angle at B, show that the diameter of the circle is equal to AB + BC – AC. (b) If a triangle is inscribed in a circle, then the product of any two sides of the triangle is equal to the product of the diameter and the perpendicular distance of the third side from the opposite vertex. Prove the above statement.

Solution. (a) Inradius of the circle is given by

(b) Given a ΔABC in which AD ⊥ BC, AE is diameter of circumcircle of ΔABC.

Q. 3. (a) A balloon is observed simultaneously from three points A, B and C on a straight road directly beneath it. The angular elevation at B is twice that at A and the angular elevation at C is thrice that at A. If the distance between A and B is a and the distance between B and C is b, find the height of the balloon in terms of a and b. (b) Find the area of the smaller part of a disc of radius 10 cm, cut off by a chord AB which subtends an angle of

Solution. By exterior angle theorem, in the adjacent fig. 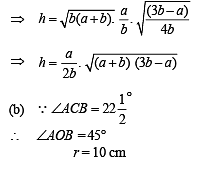 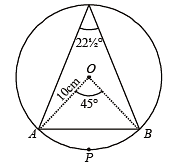 Q. 4. ABC is a triangle. D is the middle point of BC. If AD is perpendicular to AC, then prove that

Solution. Given that AB = AC

But AB || DF (given) and BC is transversal

Solution. (i)  Let h be the height of tower PQ.

⇒ P is the circumcentre of 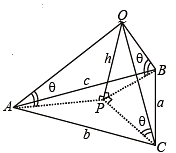 ΔABC with circum radius as 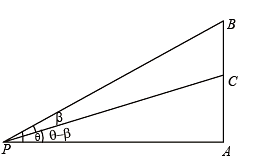 Find the angle A.

Q. 8. A vertical pole stands at a point Q on a horizontal ground. A and B are points on the ground, d meters apart. The pole subtends angles α and β at A and B respectively. AB subtends an angle γ at Q. Find the height of the pole. 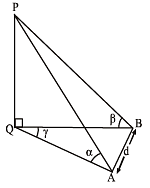 Solution. According to question figure is as follows

Which is possible only when

Solution. Given that, in Δ ABC,

where a, b, c are the lengths of sides  BC, CA and AB respectively.

Adding the above three eqs. we get

Q. 13. A ladder rests against a wall at an angle a to the horizontal. Its foot  is pulled away from the wall through a distance a, so that it slides a distance b down the wall making an angle b with the horizon tal. Show that

Solution. Let ℓ be the length of the ladder, then 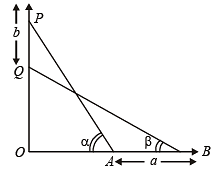 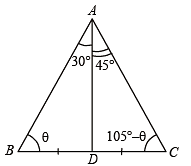 In ΔACD, using sine law, we get

Solution. Let ABC be the isosceles triangular sign board with BC horizontal. DE be the pole of height h. Let the man be standing at P such that PE = d 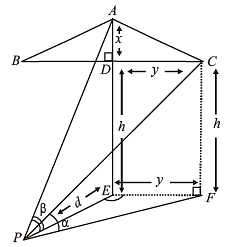