Solution. Let with respect to O, position vectors of points A, B, C, D, E, F be

Let perpendiculars from A to EF  and from B to DF meet each other at H. Let position vector of H be

we join CH.In order to prove the statement given in question, it is sufficient to prove that CH is perpendicular to DE.

all vectors are of same magnitude, say ‘a’  and angle between any two consecutive vector  is same  that is

be the unit vectors ⊥ to the plane of the polygon. 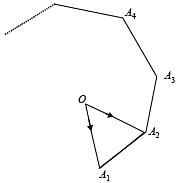 All the above three equations are satisfied for x, y, z not all zero if

Find the components of A in the new coordinate system, in terms of A1, A2, A3.

has components A1 , A2 ,A3, in the coordinate system OXYZ,

When given system is rotated through

the new x-axis is along old y-axis and new y-axis is along the old negative x-axis z remains same as before.Hence the components of A in the new system are

respectively. If the points A, B, C and D lie on a plane, find the value of λ .

Solution. Let the position vectors of points A, B, C, D be a, b, c, and d respectively with respect to some origin O.

Q. 7. Let OA CB be a parallelogram with O at the origin and OC a diagonal. Let D be the midpoint of OA. Using vector methods prove that BD and CO intersect in the same ratio. Determine this ratio.

Solution. OACB is a parallelogram with O as  origin. Let with respect to O position vectors of A and B be

respectively..Then p.v. of C is

Also D is mid pt. of OA, therefore position vector of D is

CO and BD intersect each other at P.

Let P divides CO in the ratio λ : 1 and BD in the ratio μ : 1 Then by section theorem, position vector of pt. P dividing CO in ratio

As (1) and (2) represent the position vector of same point, we should have

Equating the coefficients of

are coplanar, show that

∴ There exists scalars x, y, z, not all zero, such that

∴ system must have non trivial solution and for this, determinant of coefficient matrix should be zero

Solution. With O as origin let

be the position vectors of A and B respectively.

Then the position vector of E, the mid point of OB is

∴ Equation of OD is

and  Equation of AE is

If OD and AE intersect at P, then we will have identical values of

Hence comparing the coefficients of

Putting value of t in eq. (1) we get position vector of point of intersection P as

Solution. We are given that

and  to determine a vector

make an obtuse angle with each other.

Now we know that

Q. 12. In a triangle ABC, D an d E are points on BC and AC respectively, such that BD = 2 DC and AE = 3EC. Let P be the point of intersection of AD and BE. Find BP/PE using vector methods.

be the position vectors of pt A, B and C respectively with respect to some origin.

∴ position vector of D is

and position vector of E is

Let pt. of intersection P of AD and BE divides BE in the ratio k : 1 and AD in the ratio m : 1, then position vectors of P in these two cases are

Equating the position vectors of P in two cases we get

are not coplanar, then prove that the vector

[NOTE :  Here we have tried  to write the given expression in such a way that we can get terms involving

⇒ given vector = some constant multiple of

⇒ given vector is parallel to

Q. 14. The position vectors of the vertices A, B an d C of a tetrahedron ABCD are

respectively. The altitude from vertex D to the opposite face ABC meets the median line through A of the triangle ABC at a point E. If the length of the side AD is 4 and the volume of the tetrahedron is

find the position vector of the point E for all its possible positions.

Thus, LHS of the given expression

The document Subjective Type Questions: Vector Algebra and Three Dimensional Geometry - 1 | JEE Advanced Notes | Study Mathematics For JEE - JEE is a part of the JEE Course Mathematics For JEE.
All you need of JEE at this link: JEE
Join Course