Q.1. A bullet is fired from a rifle. If the rifle recoils freely, determine whether the kinetic energy of the rifle is greater than, equal or less than that of the bullet. (1978)

A spring of force constant k is cut into three equal parts.

What is force constant of each part?

Solution. KEYCONCEPT : For a spring, (spring constant) × (length) = Constant If length is made one third, the spring constant becomes three times.

Q.3. A 20 gm bullet pierces through a plate of mass M1 = 1 kg and then comes to rest inside a second plate of mass M2 = 2.98 kg. as shown. It is found that the two plates initially at rest, now move with equal velocities. Find the percentage loss in the initial velocity of the bullet when it is between M1 and M2. Neglect any loss of material of the plates due to the action of the  bullet. (1979)

Solution. Let v be the velocity of bullet before striking A. Applying conservation of linear momentum for the system of bullet and plate A, we get 0.02v = 0.02 v1 + 1 × v2

Again applying conservation of linear momentum for collision at B.

Q.4. When a ball is thrown up, the magnitude of its momentum decreases and then increases. Does this violate the conservation of momentum principle?

Solution. No. An external force, the gravitational pull of earth, is acting on the ball which is responsible for the change in momentum.

Q.5. In the figures (a) and (b) AC, DG and GF are fixed inclined planes, BC = EF = x and AB = DE = y. A small block of mass M is released from the point A. It slides down AC and reaches C with a speed Vc. The same block is released from rest from the point D. It slides down DGF and reaches the point F with speed VF. The coefficients of kinetic frictions between the block and both the surface AC and DGF are m. (1980) Calculate VC and VF.

Note : The result does not depend on the angles a and b. It only depends on the values of x and y.

Q.6. Two block s A an d B a re connected to each other by a string and a spring ; the string passes over a frictionless pulley as shown in the figure. Block B slides over the horizontal top  surface of a stationary block C and the block A slides along the vertical side of C, both with the same uniform speed.

The coefficient of friction between the surfaces of blocks is 0.2. Force constant of the spring is 1960 newtons/m. If mass of block A is  2 Kg., calculate the mass of block B and the energy stored in the spring. (1982 - 5 Marks)

The forces are drawn.

Note : There will be no friction force between block A and C ∴ f = µN. Her e t h ere is no normal reaction on A (because A is not pushing C)

Applying Fnet = ma on A, we get

The P.E. stored in spring is given by

Q.7. A 0.5 kg block slides from the point A (see Fig)  on a horizontal track with an initial speed of 3 m/s towards a weightless horizontal spring of length 1 m and force constant  2 Newton/ m. The part AB of the  track  is frictionless and the part  BC has the coefficients of static and kinetic friction as 0.22 and 0 2 respectively. If the distances AB  and BD are 2 m and 2.14 m respectively, find the total distance  through which the block moves before it comes to rest completely. (Take g = 10m / s2) (1983 - 7  Marks)

Solution. K.E. of block = work against friction + P.E. of spring

On solving, we get x

Since frictional force > restoring force, the body will stop here. 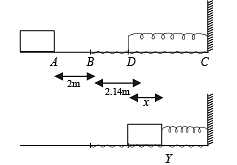 Q.8. A string, with one end fixed on a rigid wall, passing over a fixed frictionless pulley at a distance of 2m from the wall, has a point mass  M = 2kg attached to it at a distance of 1m from the wall. A mass m = 0.5 kg attached at the free end is held at rest so that the string is horizontal between the wall and the pulley and vertical beyond the pulley. What will be the speed with which the mass M will hit the wall when the mass m is released ? (1985 - 6 Marks)

Decrease in P.E. of M is Mgh

From the figure, by velocity constraint

By the principle of energy conservation

Q.9. A simple pendulum is suspended from a peg on a vertical wall. The pendulum is pulled away from the wall to a horizontal position (see fig.) and released. The 2/√5 ball hits the wall, the coefficient of restitution being

What is the minimum number of collisions after which the amplitude of oscillations becomes less than 60 degrees ?

The pendulum bob is left from position A. When it is at position C, the angular amplitude is 60°.

The velocity of bob at B, vB before first collision is

Let after n collisions, the angular amplitude is 60° when the bob again moves towards the wall from C, the velocity v'B before collision is

This means that the velocity of the bob should reduce from

The final velocity after n collisions is √gl

where e is coefficient of restitution.

Therefore, number of collisions will be 4. 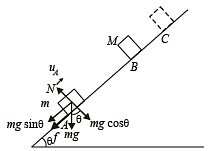 ⇒ The velocity of mass m just before collision is 8 m/s.

The velocity of mass M just before collision is 0 m/s (given).

(same as of previous case because all other things are same except mass. a is independent of mass) s = 0.5

Body of mass m moving from B to A after collision

On applying conservation of linear momentum before and after collision, we get

Q.11. A spherical ball of mass m is kept at the highest point in the space between two fixed, concentric spheres A and B (see figure). The smaller sphere A has a radius R and the space between the two spheres has a width d. The ball has a diameter very slightly less than d. All surfaces are frictionless. The ball is given a gentle push (towards the right in the figure). The angle made by the radius vector of the ball with the upward vertical is denoted by θ (shown in the figure). (2002 - 5 Marks)

(a) Express the total normal reaction force exerted by the sphere on the ball as a function of angle θ.

(b) Let NA and NB denote the magnitudes of the normal reaction forces on the ball exerted by the sphere A and B, respectively. Sketch the variations of NA and NB as functions of cos q in the range

by drawing two separate graphs in your answer book, taking cos θ on the horizontal axes.

Solution. The ball is moving in a circular motion. The necessary centripetal force is provided by (mg cosθ – N). Therefore,

According to energy conservation

The above equation shows that as q increases NA decreases.

At a particular value of q , NA will become zero and the ball will lose contact with sphere A. This condition can be found by putting NA = 0 in eq. (iii)

The graph is a straight line as shown.

Therefore the graph is as shown.