The document "A Visit To Cambridge" Summary - English Class 8 Class 8 Notes | EduRev is a part of the Class 8 Course English Honeydew Class 8.
All you need of Class 8 at this link: Class 8

This is the story of a meeting between two disabled people. Both were extraordinary in their fields. Stephen Hawking is a great scientist though he suffers from paralysis. He is confined to a wheelchair and he can speak only with the help of a computer. Firdaus Kanga, the writer, and journalist from Mumbai were born with very weak and easily breakable bones. He too moves around in a wheelchair. He meets Hawking in England. The two had discussed how the so-called normal people should look at the disabled.The writer, Firdaus, was on a walking tour through Cambridge to the UK. His guide told him about Stephen Hawking who was occupying Newton’s chair at the university. But Hawking was a disabled fellow. He wrote 'A Brief History of Time’, one of the bestsellers. 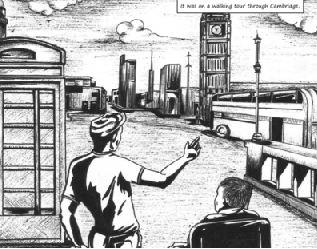 Firdaus phoned Hawking that he was from India and wanted to meet him and write about his travels in Britain. Hawking agreed to see him for half an hour. The thought of meeting somebody like him in a wheelchair gave Firdaus courage. Both of them were disabled. Their bodies were disintegrating. Hawking had a little switch in his hand. He was able to move his finger to find the words on his computer. He felt exhausted very often. But his mind was brilliant and bubbling with thoughts.Firdaus remarked that people often thought that disabled people were unhappy people. Hawking said that it was an amusing attitude. He admitted that he felt annoyed when another disabled person came and disturbed him in his work. The body in his case was just a box for the brilliant mind and soul. He did not see anything good about being disabled.Seeing the poor condition of the great scientist, Firdaus felt great relief even though he could neither walk nor even stand. Hawking did not like the idea of the disabled Olympics. He thought that it was a waste of time. His advice to the disabled people was that they should concentrate on what they were good at.Hawking made Firdaus spend one hour instead of half an hour with him, have tea and see his garden. He went about in his motorized wheelchair. Then the time came to depart. Firdaus got up to take leave of him. He could neither kiss Hawking nor cry. But he was convinced that the paralytic scientist was a symbol of bravery.