Duke was a huge Doberman, weighing 23 kilos, with a red coat and a fawn vest. Chuck Hooper prevailed upon his wife, Marcy, and bought him because he was very impressed with the energy and agility of the dog. Hooper himself had an athletic built and professionally also he was fortunate to be the Zonal Sales Manager of a chemical company. But good luck did not last long and one unlucky day, Hooper met with an accident. Hooper had to be admitted to the hospital, due to a haemorrhage in the motor section of his brain, completely paralyzing his left side. 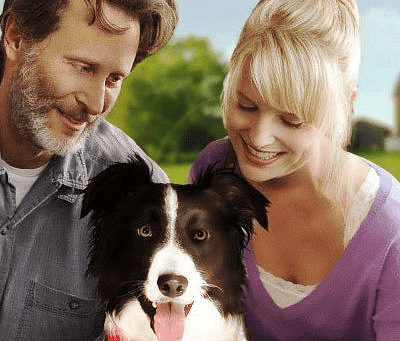 Hooper remained critical for a month. Exercises, baths, wheeled walker, nothing worked. He was discharged from the hospital and became very depressed since he was lonely at home, with Marcy being away at work. In his first meeting with Duke, after his accident, Duke shouted, charged at Hooper and hit him above the belt, making him struggle to keep his balance. Perhaps the dog sensed his master’s need and from that moment, he never left Hooper’s side. But Hooper remained grim and didn’t reciprocate at all. One fine day, Duke appeared to be in no mood to tolerate his master’s indifference. He nudged, needled, poked and snorted. By chance, Chuck’s right hand hooked onto Duke’s collar to hold him still Duke pranced, Chuck asked Marcy to make him stand, and in a few seconds as he straightened his left foot to drag forward, he had taken a step. Chuck was exhausted but a beginning was made. Next day, Duke walked to the end of the leash and tugged. Chuck managed to take four steps. In two weeks, both of them managed to reach the front porch and by next month, they were along the sidewalk. Seeing this progress, the doctor prescribed a course of physiotherapy with weights, pulleys and whirlpool baths. Soon Duke began walking with Hooper, without pausing and relaxing at each step.

On January 4, Hooper managed to walk to his district office without Duke. But Hooper was not mentally fit to undertake a full day’s work. There was no time for physiotherapy sessions so Chuck again took Duke’s help who pulled him along the street faster and faster. Chuck regained his stability, endurance and next year, he was promoted as the Regional Manager. Chuck, Marcy, and Duke moved to a new locality. But it was not to be. One day on October 12, 1957, after being run over by a car, Duke succumbed to his injuries in a nearby hospital. People who had seen Chuck and Duke walk together, sympathised with Chuck, who walked alone now. A few weeks later, the chemical company promoted Charles Hooper to the post of Assistant National Sales Manager. As a special tribute to Duke, they called this promotion as advancing ‘towards our objective, step by step.’

The document Summary - A Dog Named Duke Notes | Study English Class 9 - Class 9 is a part of the Class 9 Course English Class 9.
All you need of Class 9 at this link: Class 9
Join Course