The document Summary - Chapter 4 - Albert Einstein at School, English, Class 11 | EduRev Notes is a part of the Class 11 Course English Class 11.
All you need of Class 11 at this link: Class 11

The father of modern physics, Albert Einstein is famous to have discovered the theory of relativity which marked a revolution in physics. However, how many of us know the fact that in his early school days he was a dull student and got expelled from his school. No teacher liked him and he too, in turn, disliked attending school. This led to the school finally taking a decision in chasing him away. 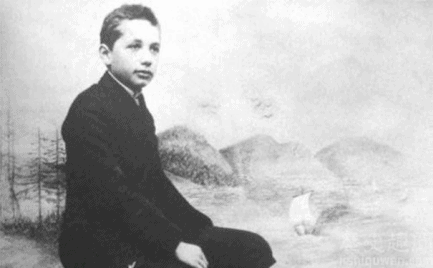 The narrative begins with Albert being asked about a date by his history teacher. This was when he was very abrupt and crude in replying that he found it pointless to memorise dates when one could flip through the necessary pages whenever one needed to. He believed in education but didn't consider learning facts as education. He hated school because he hated the conventional form of education and the teachers found him to be a 'disgrace.' Finally, the teacher, disgusted and fed up, asked him to be taken away by his father. Einstein also hated going home, not for the obvious reasons of bad food and lack of comfort, but because he hated the atmosphere of 'slum violence.'

He was so against the idea of going to school and adopting to the set educational pattern that he once confided in his friend that he thought he would never pass the exams for the school diploma. He once told his cousin Elsa that he wanted to study science simply because he liked it. He didn't need additional reasons to study the subject he was interested in. He was sent to Munich to study where within six months he grew disinterested and found it wrong to waste his father's money, especially when it was so unfruitful and unproductive.

This was the moment of Albert's childhood epiphany when he gleamed with a sudden bright idea of averting school forever. He asked his friend Yuri to search for a friendly doctor who would write him off as a lunatic at school. He wanted the doctor to certify him as a person suffering from nervous breakdown so that he could stay away from school. To this doctor, Albert revealed his love for mathematics and his maths teacher. Later, in school, he asked for a reference letter from his maths teacher. This is when he heard the most surprising comment from his maths teacher who said: “I knew you were going to leave before you knew yourself.”

Finally, the day when Albert was called by the headmaster he was not worried when this happened. However, he was taken aback when the headmaster said that he couldn't tolerate Albert's attitude towards education and his behaviour in the classroom which disturbed an ideal environment for studying. Thus, he wanted Albert to leave school. Albert felt the medical report burning a hole in his pocket.

He left the school where he had spent five miserable years, without turning his head to give it a last look. He felt like seeing only Yuri before he left Munich. Elsa was back in Berlin when he left. Yuri bade him farewell and wished him good luck.