Mr. and Mrs. Bramble were immensely proud of their son Harold. Harold was ten years old, a prodigy and an exceptional child by all standards. An intellectual, he won prizes in competitions. He was very classy and so superior that even his parents developed a complex. Harold was a model of excellent behaviour and he respected his parents a lot. Mr Bramble was a professional boxer and had been proud of his fame but ever since Harold was born, he had kept this as a secret. Harold was told that his father was a commercial traveller. Mr. Bramble who had thrived on his feats in the boxing ring trembled to see his name in print now. Both Mr. and Mrs. Bramble were secretly a little afraid of their son and did not wish to fall in his esteem. Mr. Bramble was already thirty-one years old and he had decided to have his last boxing match and then retire. A week away, Bill Bramble was scheduled to have his last fight, the twenty-round contest with American Murphy at the National Sporting Club, for which he was training at the White Hart down the road. 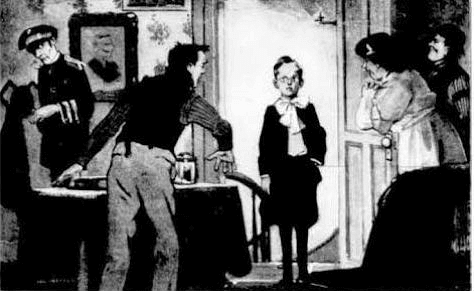 Mrs. Bramble sends Harold for a walk but she is surprised to see her husband and her brother, Major Percy Stokes in the doorway. She is shocked to know that Bill has decided not to fight and there is a lot of discussion regarding his decision with Percy Stokes. Mrs. Bramble makes it clear that this step was unacceptable to her, even if she did not like her husband’s profession. Bill Bramble was supposed to win five hundred pounds, and one hundred and twenty, even if he lost. This money was very much needed to cater to Harold’s education. The trainer, Jerry Fisher, enters at this juncture and he is also shocked to discover that Bill has decided to back out at the eleventh hour.

Jerry begs, pleads, cries and tempts Bill but he is steadfast in his decision because this fight will be covered by all newspapers and Harold will discover this secret. Tempers are running high, and at this critical moment, Harold makes his entry. Mr. Jerry Fisher feels cheated, he wants his revenge. So he spills over the entire story to Harold, despite all opposition. Bill feels let down in front of his son and tells him frankly that he was not a man of wrath but just a professional boxer and he is withdrawing from his last match. Harold who had been watching all suddenly surprises everyone. He is angry with his parents for hiding this secret but the content of his speech takes everyone’s breath away. Harold reveals that he was betting his pocket money on the defeat of Jimmy Murphy and his friends would have been awfully proud of him, had they known that his father was ‘Young Porky’. He even requests for a photograph of his father to impress his friends. This talk encourages Jerry Fischer and Bill also goes to complete his training. Harold reverts back to playing games with his mother and continues with his affectionate chat.

The document Summary - Keeping It From Harold Notes | Study English Class 9 - Class 9 is a part of the Class 9 Course English Class 9.
All you need of Class 9 at this link: Class 9
Join Course