Three friendsGeorge, Harris and the narrator were friends. All the three considered themselves to be seriously ill. They felt seedy. They met to discuss how to deal with their problems. George and Harris thought they suffered from fits of giddiness.

But the narrator was sure that he suffered from the ailment of liver. He was certain about his ailment because he had recently been reading a patent liver-pill circular. He had been in the habit of imagining, after reading patent medicine advertisements, that he had the same symptoms of the ailment as described in them. 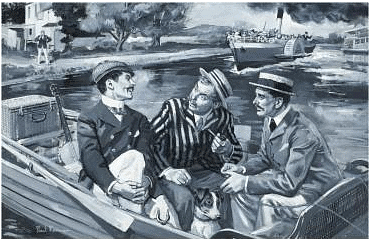 He thought that the only disease that he did not suffer from was the disease of the housemaid’s knee (arthritis) though he suffered from ‘gout’ in the extreme form. He thought that the students of the medical colleges would not have to ‘walk the hospitals’ if they had him as a patient. He was a hospital himself.

The doctor’s adviceHe went to the doctor who was his friend. He his pulse, looked at his tongue and examined thoroughly. The doctor, then, prescribed medicines . He went to the chemist to get the medicines.

The chemist refused to give him the prescribed medicines by saying that he was only a chemist The narrator read the prescription. The medicines prescribed were “one pound beefsteak, with one pint bitter beer every six hours, a ten-mile walk every morning and sleep at 11 sharp every night.”

Plan for a boat-tripThe narrator, then, said that he suffered from a weak liver even as a boy. The disease never left him even for a day. The family considered it laziness and cured it by giving him clumps on the side of his head. The friends described to each other their maladies. They came to the conclusion that the remedy for their maladies was ‘rest’ and a holiday.

They should seek out some old—world spot far away from the crowd. They discussed a sea trip but the narrator was strongly opposed to it. He gave a graphic detail of what happened to his brother-in-law and a friend who went to sea-trips.

George seemed to be the only person who liked sea-trips and he boasted about it He, finally, put forward a suggestion : “Let’s go up the river a boat trip” . They all agreed with this suggestion. The only one who did not accept this suggestion was Montmorency — the dog. But his objection was ruled out.

The document Summary - Chapter - 1, Three Men in a Boat Notes | Study English Class 9 - Class 9 is a part of the Class 9 Course English Class 9.
All you need of Class 9 at this link: Class 9
Join Course