English (It so Happened) Class 8

The document Summary - Children at work Class 8 Notes | EduRev is a part of the Class 8 Course English (It so Happened) Class 8.
All you need of Class 8 at this link: Class 8

Children are made to work and earn in different ways. Some of them help their family make a livelihood. Many run away from unhappy homes and they need to support themselves. They don’t go to any school.Velu was an eleven year old boy. He ran away from home because his father was addicted to drinking. He used to beat him and his sister and snatched whatever they earned.

The Kanyakumari Express pulled in at Chennai Station. Velu got down and sat on a bench. He had never before seen so many people with their luggage. The noise was terrible. He was feeling tired, miserable and hungry. In his bundle he carried a shirt, a towel and a comb. He had neither money nor ticket. He tried to sleep on the floor near the door. He heard the rough voice of a girl around his own age. The girl was carrying a big bag. She was picking up plastic cups and putting them into the sack. Her name was Jaya. She sat down next to him. She said she could find some food for him to eat. She stood up to go. Velu had nowhere else to go. So he ran after her.The two got to the road. Smoke and dust made Velu’s head spin. The girl dragged him to the other side of the street. She took him on to a bridge. Velu peeped over the railing. The road under him ran to the city. Velu saw big buildings in the distance. Jaya warned him not to get caught otherwise he would be in jail. His bare feet burned on the hot tar road as he walked.They finally stopped in front of a big building. A marriage was going to be performed inside. Behind the hall was a garbage heap. The girl picked up a crushed banana and a vada which Velu ate unwillingly. He felt better. Then the girl went to home to drop her full bag and get another one. Velu also joined her. 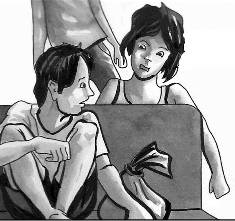 Jaya and Velu walked along the roads and came to a bridge across a dirty drain. They came to a row of huts built out of wood, plastic and sheets. It was Jaya’s village. She dumped her sack there and gave him a pair of old shoes, a sack and stick. He wondered what work she wanted him to do. She told him that they were rag pickers. They collected things from rubbish bins-paper, plastic and glass. It was sold to Jaggu, a junk dealer. Velu had no option. He decided to work as a rag picker until he found a better job.

English (It so Happened) Class 8