Class 8: Summary - How the Camel Got His Hump Notes | Study English Class 8 - Class 8

The document Summary - How the Camel Got His Hump Notes | Study English Class 8 - Class 8 is a part of the Class 8 Course English Class 8.
All you need of Class 8 at this link: Class 8

The world had just begun. The animals had started working for humans. The Horse, the Dog, and the Ox pulled loads and served man. But there was only one animal Camel that refused to work. It lived in the desert and ate thorny plants. When anybody spoke to him, he said ‘Humph!’.

One Monday morning the Horse came to the Camel. He told the desert animal to work like them. So did the Dog and the Ox. But they had no success. Then the three complained to Man against the Camel. But Man grew angry and asked them to work double to compensate Camel’s work. So the animals were not happy. They held a panchayat. The Camel laughed at them and went away. 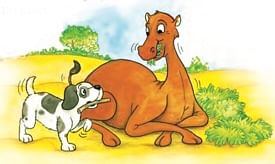 Soon the Djinn or the Spirit in charge of deserts came there. He listened to their complaint and agreed with them. He decided to punish such an idle animal. He found the Camel looking at his own reflection in the pool of water. He had made the three other animals do extra work since Monday morning. When the Djinn aked him to clarify, the Camel only said ‘Humph’! He showed no willingness to work.

The Djinn put a curse on the Camel. Soon the Camel’s back puffed up into a big hump. It was Thursday. The Camel was told to work for three days without eating anything, because his food was stored in his hump.

The Camel went away to join the Three. From that day he has been wearing a hump but there was no escape from work. He has, however, still not learned to behave.

The document Summary - How the Camel Got His Hump Notes | Study English Class 8 - Class 8 is a part of the Class 8 Course English Class 8.
All you need of Class 8 at this link: Class 8