The document Summary - The Best Christmas Present in the World Class 8 Notes | EduRev is a part of the Class 8 Course Class 8 English by VP Classes.
All you need of Class 8 at this link: Class 8

The author went to a junk shop in Bridport. He noticed a roll-top desk. It was very old and made of oak. It was in a bad condition. It had burn-marks down one side. Since it was cheap, the author decided to buy it and get it repaired. He began working on it on Christmas Eve.

He removed the roll-top and tried hard to pull out the drawer. It had suffered much damage due to fire and water. The drawer was jammed. He hit it hard with his fist and pulled it out. He found a secret drawer underneath. He took out a small black tin box. There was a note on it that said: “Jim’s last letter, received January 25, 1915”. 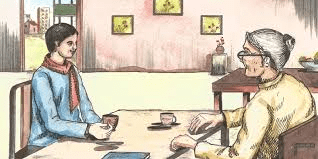 The letter  writer also wished to put it in her grave. Out of curiosity he opened the box. Inside it he found an envelope with the address: “Mrs. Jim Macpherson, 12 Copper Beeches, Bridport, Dorset.” The letter was dated Dec. 26, 1914. The letter had been written by Jim to his wife Connie. He was a soldier, set against the Germans during the First World War. Jim wrote to her that he was very happy because something wonderful had happened.

The soldiers on both sides of the no man’s land were taking up positions in their trenches. It was Christmas morning, cold and frosty.

Jim saw the German soldiers waving a white flag. They were calling out the English soldiers to say Happy Christmas. It was a big surprise to be greeted like friends by the enemies. But it was true, not a trick. The English soldiers also wished them in return.The leader said that they wanted to celebrate the festival. Jim was the office in command. He allowed his men to join the Germans. Grey coats and Khaki coats mingled in the middle. In the time of war, they were making peace. The German soldier who came first was named Hans Wolf. Before joining the army he used to play the cello in an orchestra. Jim had been a school teacher in Dorset. Hans lied that he knew Dorset  well. In fact, he had read about that place in Hardy’s novel, Far from the Madding Crowd.

The soldiers from the rival camps smoked, laughed, drank and feasted. Hans said that he liked the marzipan, the sweet covering on Jim’s bread. Jim wrote in the letter, that he had never seen or imagined a Christmas Party like that. They played football also. Both agreed on one point. The countries should have better resolved their disputes by playing a football or cricket match because no one dies in a match whereas war leaves behind orphans and widows.The game was finished, so did the drinks and cakes. Jim told Hans that they hoped to see families as soon as the fighting ended by Christmas next year.The author put the letter back into the envelope and drove into Bridport. He meant to hand over the letter to Connie (Mrs. Macpherson). Connie was now 101 years old. Her house had caught fire, but she was saved. She was in a conservatory.

Notes For the Teacher
Some suggestions given below are applicable to all prose lessons in the book.