The document Summary - The Tsunami Notes | Study English Class 8 - Class 8 is a part of the Class 8 Course English Class 8.
All you need of Class 8 at this link: Class 8

I‘Tsunami’ refers to a very large and powerful wave in the sea. It is caused by some earthquake under the sea. One such calamity hit several countries on December 26, 2004. The worst affected parts were coastal parts of India, the Andaman and Nicobar Islands and Thailand. Some 1,50,000 people lost their lives. But animals suffered very few casualties. Perhaps they  had sensed the coming earthquake and they ran to safer high places.

This lesson recounts a few stories of bravery and intelligence when the Tsunami hit the Andamans. The first story is about Ignesious, the manager of a cooperative society in Katchall. He was woken up by his wife at 6 am. The family rushed out of the house. When the earth stopped shaking, the sea started rising. The waves washed away his two children and in-laws. But his three other children were saved because they were with him. 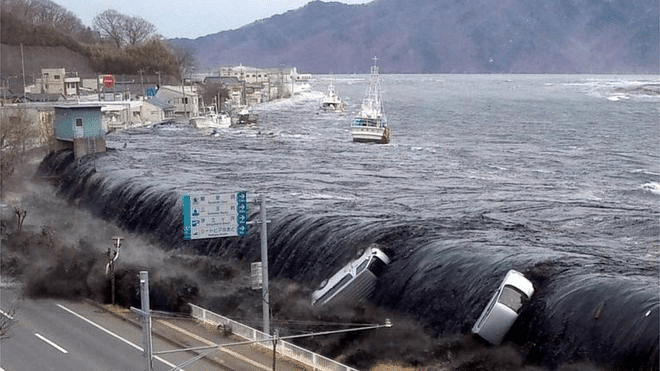 Sanjeev was a policeman. He managed to save himself, his wife and daughter from the waves. But soon he heard cries for help from the wife of John, the guesthouse cook. He jumped into the water to rescue her. But both were washed away. 13 year old Meghna was carried away along with her parents and 77 other people. She held on to a wooden door for two days. Eleven times the relief helicopters flew overhead, but they couldn't spot her. However, she was brought to the shore at last by a wave.

Almas Javed was a ten-year-old student of a convent school in Port Blair. Her family had gone to another island to celebrate Christmas. Almas's father saw the sea waves receding in the morning. They understood that the waves would come back with force. He tried to take his family to a safer place. But her father and grandfather were swept away by a giant wave. Her mother and aunts were washed away. Almas climbed on to a log of wood. She later found herself in a hospital.

IIThere is a story from Thailand. The Smith family was celebrating Christmas at a beach resort. The parents had two daughters. The water kept coming in on 26 December, 2004. But little Tilly Smith sensed the danger ahead. She recalled the geography lesson that Tsunami could be caused by quakes, volcanoes and landslides. She called her family to get out of the beach. Her parents went up to the third floor of the hotel and survived. Thus, her geography lesson saved their lives.

While humans lost their lives, wild and domestic animals sensed the danger in time. Elephants ran for higher ground and the dogs, birds and zoo animals looked for safer places. Perhaps animals possess a sixth sense. They feel the tremor long before humans realise. So not many animals were reported dead. At Yala National Park in Sri Lanka, no dead bodies of animals were found while sixty visitors were washed away.

Notes For the Teacher

The document Summary - The Tsunami Notes | Study English Class 8 - Class 8 is a part of the Class 8 Course English Class 8.
All you need of Class 8 at this link: Class 8