Cinema technology has remained much the same for a century, so when will it go digital? Kevin Hilton views the projections.

A - Cinema is full of contradictions. It is high-tech and old-fashioned at the same time. Today's films are full of digital sound and computer-generated special effects. Yet they are still stored on celluloid film, the basis of which is more than 100 years old. They are also displayed with projectors and screens that seem to belong to our great grandparents' generation.B - Now that we are in the second century of cinema, there are moves to bring the medium right up to date. This will involve revolutionizing not just how films are made but also how they are distributed and presented. The aim is not only to produce and prepare films digitally but to be able to send them to movie theatres by digital, electronic means. High-resolution digital projectors would then show the film. Supporters say this will make considerable savings at all stages of this chain, particularly for distribution.C - With such a major technological revolution on the horizon, it seems strange that the industry is still not sure what to call itself This may appear a minor point, but the choices, 'digital' cinema and 'electronic' cinema (e-cinema), suggest different approaches to, and aspects of, the business. Digital cinema refers to the physical capture of images; e-cinema covers the whole chain, from production through post-production (editing, addition of special effects, and construction of soundtrack) to distribution and projection.D - And what about the effects of the new medium? The main selling point of digital cinema is the high resolution and sharpness of the final image. But those who support the old-fashioned approach to film point to the celluloid medium's quality of warmth. A recurring criticism of video is that it may be too good: uncomfortably real, rather like looking through an open window. In 1989, the director of the first full-length American digital high-definition movie admitted that the picture had a 'stark, strange reality to it'.E - Even the money-saving aspect of e-cinema is doubted. One expert says that existing cinemas will have to show the new material and not all of them will readily or rapidly furnish themselves with the right equipment. 'E-cinema is seen as a way of saving money because print costs a lot,' he says. Tut for that to work, cinemas have to be showing the films because cinemas are the engine that drives the film industry.'F - This view has prompted some pro-digital entrepreneurs to take a slightly different approach. HD Thames is looking at reinventing the existing cinema market, moving towards e-theatre, which would use digital video and projection to present plays, musicals, and some sporting events to the public. This is not that different from the large-screen TV system that was set up in New York in 1930, and John Logie Baird's experiments with TV in the late 1920s and early 30s.

Questions 1-6: The Reading Passage has six paragraphs A–F. Choose the correct heading for each paragraph from the list of headings below. 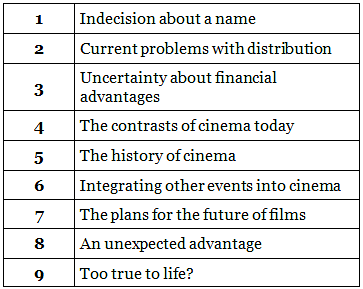 Questions 7-11: Complete the summary below. Choose NO MORE THAN THREE WORDS for each answer. Write your answers in blanks 7-11 on your answer sheet.There are big changes ahead for cinema if digital production takes place and the industry no longer uses (7) _______ and gets rid of the old-fashioned (8) _______ and used to show movies. The main advantage is likely to be that the final image will be clearer. However, some people argue that the digital picture will lack (9) _______ . In addition, digital production will only reduce costs if cinemas are willing to buy new (10) _______ . As a result, experiments with what is called (11) _______may mark a change in the whole entertainment industry.

There are big changes ahead for cinema if digital production takes place and the industry no longer uses (7) (celluloid) and gets rid of the old-fashioned (8) (projectors) and used to show movies. The main advantage is likely to be that the final image will be clearer. However, some people argue that the digital picture will lack (9) (warmth). In addition, digital production will only reduce costs if cinemas are willing to buy new (10) (equipment). As a result, experiments with what is called (11) (e-theatre) may mark a change in the whole entertainment industry.