Mechanics can be defined as the branch of physics concerned with the state of rest or motion of bodies that subjected to the action of forces. 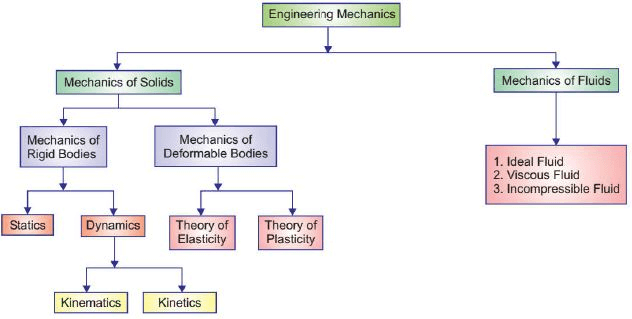 A rigid body may be defined as a body in which the relative positions of any two particles do not change under the action of forces means the distance between two points/particles remain same before and after applying external forces.ORA body which does not deform under the influence of forces is known as a rigid body.For a rigid body, relative positions of A’B’ and AB remains same before and after the application of forces

Rigid Body Mechanics can be divided into two branches.

1. Statics: It is the branch of mechanics that deals with the study of forces acting on a body in equilibrium. Either the body at rest or in uniform motion is called statics

2. Dynamics: It is the branch of mechanics that deals with the study of forces on body in motion is called dynamics. It is further divided into two branches.

The following are the fundamental laws of mechanics:

3. Law of transmissibility of forces

Law 1 :A particle remains at rest or continues to move with uniform velocity if there is no unbalanced force acting on it.

Law 2 :The second law states that the rate of change of momentum of a body, is directly proportional to the force applied and this change in momentum takes place in the direction of the applied force.

Newton's second law of motion explains how an object will change velocity if acted by a force. For a body with constant mass, the second law can also be stated in terms of an object's acceleration. The acceleration of a particle is proportional to the vector sum of forces acting on it and occurs along a straight line in which the force acts. Law 3 :To every action there is always an equal reaction: or the mutual interactions of two bodies are always equal but directed in opposite direction

Law of Transmissibility of Force

Principle of transmissibility states that a force may be applied at any point on a rigid body along its given line of action without altering the effects of the force on which it acts.For example, the force F acts on a rigid body at point A. According to the principle of transmissibility of forces, this force has the same effect on the body as a force F applied at point B along its line of action.

OCD is a right angled triangle

Note : Parallelogram Law is valid for all vectors and hence forces also

When several forces of different magnitude and direction act upon a body or particle, it is called force system.

1. Collinear Force System : When a system of forces act along the same line, they are called collinear forces. 3. Concurrent and Non Concurrent Force System: A concurrent force system contains forces whose lines-of action meet at same one point. They may either be 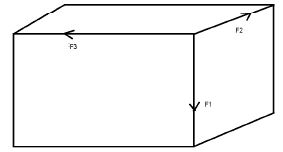 4. Parallel Force Systems: Forces whose line of action are parallel to each other are called parallel force system. They are of 2 types

b. Unlike Parallel Forces