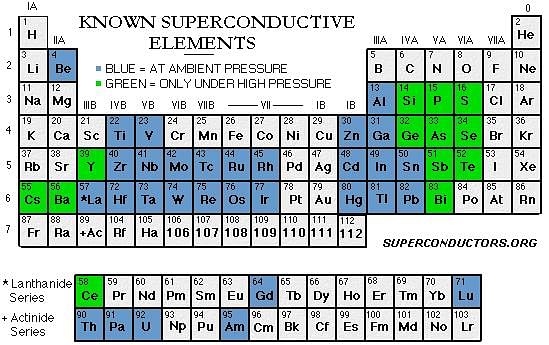 HIGH TEMPERATURE SUPERCONDUCTORS
Our department has an experimental research effort in the area of low-temperature physics, with emphasis on the study of the transport and magnetic behaviors of the high temperature superconductors. The picture shows the typical structure of such a material. 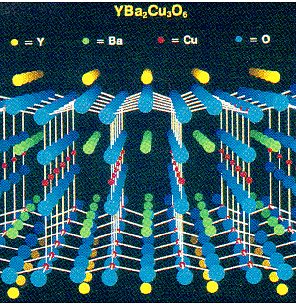 The high temperature superconductors represent a new class of materials which bear extraordinary superconducting and magnetic properties and great potential for wide-ranging technological applications. The importance of understanding the transport and magnetic behaviors of these novel materials is two-fold. First, it could lead to a better understanding of the basic phenomena of superconductivity in these materials. Second, it could provide ways to improve the magnetic quality of the presently known materials by enhancing flux pinning in a controllable manner.
When a current is applied to a type II superconductor (blue rectangular box) in the mixed state, the magnetic vortices (blue cylinders) feel a force (Lorentz force) that pushes the vortices at right angles to the current flow. This movement dissipates energy and produces resistance [from D. J. Bishop et al., Scientific American, 48 (Feb. 1993)]. 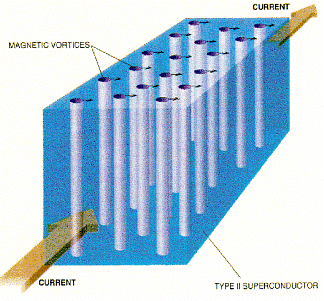 When a type II superconductor is placed in a magnetic field Hc1 < H < Hc2, where Hc1 and Hc2 are the lower and upper critical fields, respectively, the magnetic vortices that penetrate the material should form a uniform triangular lattice (Abrikosov vortex lattice) with a lattice spacing determined by the strength of H. If H is increased, the vortices become more closely spaced and their cores start to overlap. At Hc2 the vortex lattice and the pairing of the electrons disappear and the material becomes normal. However, within the family of high-temperature superconductors, the vortices have been found to be capable of forming a number of exotic new phases of matter besides the triangular lattice. The weak pinning of the flux lines of high-temperature superconductors gives rise to energy dissipation in these materials at finite currents, which limits the maximum value of the critical current (the current required to destroy superconductivity) and, hence, a variety of applications of the high-temperature superconductors. Knowing how the vortices move and arrange themselves under various temperature and magnetic-field conditions, as well as how these phenomena are influenced by the physical properties of the material, will be critical in controlling the flux motion and maintaining the supercurrent flow in these materials.
Our research is conducted on several systems of copper-oxide superconductors, some of which exhibit superconductivity at temperatures as high as about 130 K, well above the boiling point of liquid nitrogen (77 K). Measurements such as magnetic susceptibility, magnetoresistance, Hall effect, and current-voltage characteristics over a wide range of temperatures, applied magnetic fields, and/or applied pressures are used to probe the physics of these materials. These experiments are carried out on two major pieces of equipment: (1) a low temperature platform suitable for transport measurements which consists of a 4He cryostat with pumping station and temperature controller for measurements from room temperature to 1.8 K, a 9 tesla magnet, and the required computer-interfaced electronics; (2) a SQUID (superconducting quantum interference device) magnetometer which incorporates all the hardware and software needed for precise magnetic measurements from room temperature to 1.8 K and magnetic fields up to 5 tesla.