Deflection angle (d) and angle of deflection (f) are different things.In this method the curve is set out by the tangential angle called the deflection angle with a theodolite and a chain or tope.Derivation of the Formula : 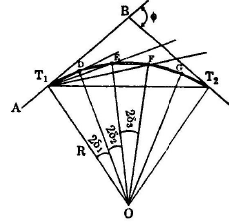 Total length of the vertical curves,

� h = kN2 = Tangent correction where k is a constant and N is the distance measured from O.

TRINGULATIONThe process of measuring the anges of a chosen networks of triangles formed by a number of station marked on the surface of the earth is called triangulation.Principle of Triangulation If all the three angles and the length of one its sides of a triangles are known, then the lengths of the remaining sides of the triangle can be calculated trignometrically. 

Phase of a Signal When a cylindrical opaque signal which is partly illuminated by the sun and partly remain in shadow, is observed, the observer sees only illuminated portion from his station and thus bisects the centre of the illuminated portion. The error of bisection thus introduced is known as phase of the signal.