LEVEL : The instrument which is used for levelling is known as a level. It consists essentially of the following parts:(i) A telescope is to provide a line of sight.(ii) A level tube to make the line of sight horizontal.(iii) A levelling head to bring the bubble of the tube level at the centre of its run.(iv) A tripod to support the instrument.

DUMPY LEVEL: It is a simple, compact and stable instrument. The telescope is rigidly fixed to its support and it can neither be rotated about its longitudinal axis and nor it can be removed from its support.Thus it has

Advantages and disadvantages of Dumpy Level:(i) It is simple in construction with a few movable parts.(ii) It requires fewer permanent adjustments.(iii) Adjustment once carried out remains for a longer period.

Levelling Staff : A straight, rectangular wooden rod graduated into meters/feet and further smaller divisions, is called a levelling staff. The bottom of the levelling staff represents the zero- reading. In the most common forms the smallest division is of 5 mm and graduations are in the form of alternate black and white strips.The purpose of a level (instrument) is to establish a horizontal line of sight. The purpose of the levelling staff is to determine the amount by the which station (i.e. foot of the staff) is above or below the line of sight.

Vertical angle : The angle between an inclined line and a horizontal line at a place in vertical plane, is called vertical angle.

DATUM SURFACE :The imaginary level surface with reference to which vertical distance of  the points (above or below) are measured, is called Datum Surface. In India the datum adopted for G.T.S. Bench marks is the mean sea level at Karanchi.Mean Sea Level datum: The M.S.L. datum adopted by the survey of India for determining the elevation of different points in India is that of Bombay.

Reduced Level (R.L.): The height or depth of a point above or below the assumed datum is called reduced level (R.L.). It is also known as elevation of the point. Elevations of the point- below the datum surface, are known as negative elevation.Line of sight: The line passing through the optical centre of the objective, and intersection of cross hairs is known as line of sight.

Bench mark (B.M.): A relatively permanent and fixed reference point of known elevation above the assumed datum, is called a bench mark.

Levelling instrument: Mainly there are two instruments which are commonly used in direct levelling.

(i) A level (Telescope)(ii) A levelling staff

2. Station : The point where levelling staff is held, is called station. It is the point whose elevation is to be determined.

Height of the instrument (H.I.): The elevation of the line of sight with respect to assumed datum, is known as height of instrument.

The first sight taken on a levelling staff held at point of known elevation is called back sight. It is also known as + ve sight.Back sight enables the surveyor to obtain the height of the instrument.

Fore sight (F.S.): The sight taken on a levelling staff held at a point of unknown elevation to ascertain the amount by which the point is above or below the line of sight, is called a foresight.Fore sight enables the surveyor to obtain he elevation of the point. It is also generally known as minus sight.

Change point:The point on which both the fore sight and back sight, are taken during the operation of levelling, is called a change point.It is also called a turning point (T.P.)

Levelling may be classified as : 1. Simple levelling,2. Differential levelling.

1. Simple levelling : The operation of levelling for determining the difference in elevation, if not too great between two points visible from a single position of the level, is known as simple levelling.

Notes :The following points may be noted :

(i) The points where two readings are taken at the successive points C, D, E, etc. are called change points.(ii) The level must be set up on firm ground otherwise it may sink during the interval of reading the back and foresight.(iii) The bubble must always be brought to the centre of its run before staff reading is taken.(iv). The staff from the change point must not be removed till a back sight is taken. Let x1 x2, x3.........xn be the back sights and y1, y2, y3........ yn be the fore sights on the staff held vertically at A, C, D........etc. Here, Difference of level between A and C = x1 —y1 Difference of level between C and D = x2 —y2 Inference of level between D and E = x3– y3 and so on.Difference of level of points A and B = S B.S. — S F.S.If  the difference in level is +ve, the closing point B is higher than starting point A. Whereas if negative,  then point B is lower than the point A.R.L. of the point B = R.L. of point A ± ( S B.S. — S F.S.)

Booking and Reduction of the Level:

Booking and reduction of the level may be done by following two methods :

Arithmetic check of Rise and fall method : SB.S. — SF.S. = SRise – SFall = Last R.L. – First R.L.In the rise and fall method of reduction, a complete check on intermediate sights is also provided because these are included for calculating the rises and falls.Arithmetic Check of Height of Collimation method : B.S. – F.S. = Last R.L. – First R.L.In this method there is no check on intermediate sights.Comparison of height of Collimation Method with Rise and Fall method:

1. It is more rapid and saves a considerable time and labour.2. It is well adopted for reduction of levels for construction work such as longitudinal or cross-section levelling operation.3. There is no check on reduction of R.Ls of intermediate stations.4. There are only two arithmetic checks i.e. the difference between the sum of back sight and the sum of fore sight must be equal to be the difference in R.L. of last station and first station.5. Errors if any in intermediate sights are not detected.

Gradient of a line :

The gradient of a line joining two points, is calculated as given below,

Readings recorded in a level book may be classified into two categories:(1) Basic reading: The reading which are observed by a level on a levelling staff  held vertically at the starting B.M. and other intermediate stations, are known as basic readings, such as back sight, intermediate sights, fore sights and the R. L. of the get bench marks.(2) Derived readings : The reading which are derived with the help of the basic readings, are known as the derived readings such as rises, falls, the height of collimation and R.L.s of unknown points.

(I) When level is near to A

(II) When level is near to B

Let h = true of levels between A and B e = combined error due to refraction, curvature and imperfect adjustment of the line collimation.First Position of the level:

True difference of level between A and B

The true difference of level between A and  B is equal to the mean of the two apparent different of level.The combined error can be obtained by equating the equations (i) and (ii), 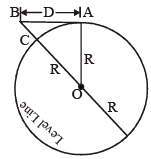 Let AB = d, the horizontal distance between A and OC = OA = R , the radius of earth BC = Cc, the correction for the curvature from the right angled DBAO, we get

But CC is negligible as compared to the diameter of the earth, therefore

correction for curvature is, negative and is always substracted from the staff reading.

Hence correction for curvature is, negative and is always added to the staff reading.

Correct due to refraction =

Hence, combined correction due to curvature and refraction =

Combined correction due to curvature and refraction = 0.0673 d2 m where d is in km.