Curve :  A regular curved path followed by a railway by a railway or highway alignment is called a curve.A curve may be either  circular, parabolic or spiral and is always tangential to the two straight directions at its ends.

1. SIMPLE CURVE : The curve which is a single arc of a circle is known as simple curve or a simple circular curve. It is tangential to both the straights ATt and CT2.

2. COMPONOUND CURVE : A curve which consists of two or more arce of different circles with different radii having different centres lying on the same side of the common tangent is known as compound curve .

3. REVERSE CURVE : A curve which consists of two area of different circles of same or different radii, is known as a reverse curve. In such curves the centre areas are on the opposite sides of the curve. The two areas turn in opposite directions with a common tangent at the junction.

NOTATION FOR CIRCULAR CURVE :TANGENTS : The straight line AB and BC, which are connected by the curve are called the tangents or straights to the curve.

Right and Left Hand Curve: If the curve deflects to the right of the direction of the progress of survey (AB), is called a right-hand curve, if to the left, it is called a left hand curve.

Angle of Deflection : The angle through which forward tangent deflects, is called angle of deflection of the curve. It may be either to the right or to the left.

Tangent Distance : The distance from the point of intersection to the tangent point (T.P) is called the tangent distance or Tangent length (BT1 and BT2).

MID Ordinate: The ordinate joining the mid point of the curve and long chord, is called mid- ordinate it is also known as versed sign.

Normal Chord: A chord between two successive regular pegs on the curve, is called a normal chord.Sub-Chord : When a chord is shorter than the normal chord, it is called a sub-chord. These sub-chords generally occur at the beginning and at the end of the curve.Elements of the Simple Curve : Tengent length = BT1 = BT2 = ?In DOBT,

Fixed length of an are : The degree of curve may be defined as the central angle of the curve that is subtended by an arc of 30 metres (or 100 ft). It is adopted for railway curves.

Based on Fixed Length of a Chord : The degree of a cure may be defined a fixed central angle of the curve that is subtended by a chord of 30 metres lengthl.It is adopted for road curve. 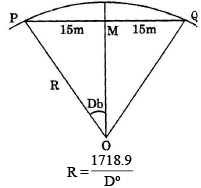