It is a node that forward frames from one Ethernet to the other. This n ode would be in promiscuous mode, accepting all frames transmitted on either of the Ether nets, so it could forward them to the other. A bridge is connected between two LANs with port. By using the port number the LANs are addressed. Connected LANs are known as extended LAN

Having a human maintain this table is quite a burden, so a bridge can learn this information for itself. The idea is for each bridge to inspect the source address in all the frames it receives. When a bridge first boots, this table is empty; entries are added over time. Also a timeout is associated with each entry and the bridge is cards the entry after a specified period of time. 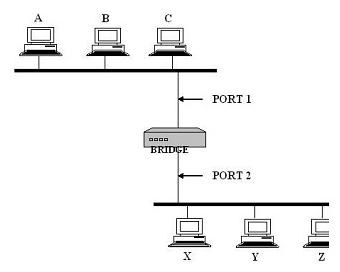 If the extended LAN is having loops then the frames potentially loop through the extended LAN forever. There are two reasons to an extended LAN to have a loop in it. One possibility is that the network is managed by more than one administrator; no single person knows the entire configuration of the network. Second, loops are built in to network on purpose to provide redundancy in case of failure. Bridges must be able to correctly handle loops. This problem is addressed by having the bridges run a distributed spanning tree algorithm.

The spanning tree algorithm wad developed by Digital Equipment Corporation. The main idea is for the bridges to select the ports over which they will forward frames. The algorithm selects as

follows. Each bridge has a unique identifier. In the above example they are labeled as B1, B2, B3

… the algorithm first elects the bridge with smallest ID as the root of the spanning tree. The root bridge always forwards frames out over all of its ports. Then each bridge computes the shortest path to root and notes which of its ports is on this path. This port is also elected as the bridge‟s preferred path to the root. Finally, all the bridges connected to a given LAN elect a single designated bridge that will be responsible for forwarding frames toward the root bridge. Each LANs designated bridge is the one that is closest to the root, and if two or more bridges are equally close to the root, then the bridge which having smallest ID wins.

In the above example, B1 is the root bridge since it having the smallest ID. Both B3 and

B5 are connected to LAN A, but B5 is the designated bridge since it is closer to the root.

Similarly B5 and B7 are connected to LAN B, but B5 is the designated bridge even they are

equally closer to the root since B5 having smallest ID. 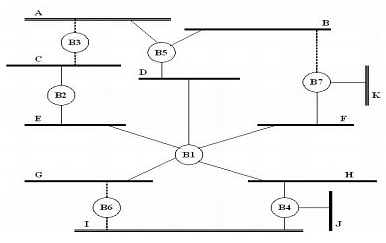 The bridges have to exchange configuration messages with each other and then decide whether or not they are the root or a designated bridge based on this message. The configuration contains three pieces of information.

1.     The ID for the bridge that is sending the message

2.     The ID for what the sending bridge believes to be the root bridge

Most LANs support both broadcast and multicast; then bridges must also support these two features.

Broadcast is simple, each bridge forward a frame with a destination broadcast address out on each active port other that the one on which the frame was received. In multicasting, each host deciding for itself whether or not to accept the message.