Except for very small machines, the armature resistance of a synchronous motor is relatively insigniﬁcant compared to its synchronous reactance, so that Eqn. 61 to be approximated to

The equivalent-circuit and phasor diagram corresponding to this relation are shown in Fig. 54 and Fig. 55. These are normally used for analyzing the behavior of a synchronous motor, due to changes in load and/or changes in ﬁeld excitation.From this phasor diagram, we have,

Multiplying through by VT and rearranging terms we have,

(64)Since the left side of Eqn. 64 is an expression for active power input and as the winding resistance is assumed to be negligible this power input will also represent the electromagnetic power developed, per phase, by the synchronous motor.Thus,

(66)Thus, for a three-phase synchronous motor,

(68)Eqn. 66, called the synchronous-machine power equation, expresses the electro magnetic power developed per phase by a cylindrical-rotor motor, in terms of its excitation voltage and power angle. Assuming a constant source voltage and constant supply frequency, Eqn. 65 and Eqn. 66 may be expressed as proportionalities that are very useful for analyzing the behavior of a synchronous-motor: Figure 54: Equivalent-circuit of a synchronous-motor, assuming armature resistance is negligible Eﬀect of changes in load on armature current, power angle, and power factor of synchronous motor

The eﬀects of changes in mechanical or shaft load on armature current, power angle, and power factor can be seen from the phasor diagram shown in Fig. 56; As already stated, the applied stator voltage, frequency, and ﬁeld excitation are assumed, constant. The initial load conditions, are represented by the thick lines. The eﬀect of increasing the shaft load to twice its initial value are represented by the light lines indicating the new steady state conditions. These are drawn in accordance with Eqn. 69 and Eqn. 70, when the shaft load is doubled both Ia cos φi and Ef sin δ are doubled. While redrawing the phasor diagrams to show new steady-state conditions, the line of action of the new j IaXs phasor must be perpendicular to the new Ia phasor. Furthermore, as shown in Fig. 56, if the excitation is not changed, increasing the shaft load causes the locus of the Ef phasor to follow a circular arc, thereby increasing its phase angle with increasing shaft load. Note also that an increase in shaft load is also accompanied by a decrease in φi; resulting in an increase in power factor.As additional load is placed on the machine, the rotor continues to increase its angle Figure 56: Phasor diagram showing eﬀect of changes in shaft load on armature current, power angle and power factor of a synchronous motorof lag relative to the rotating magnetic ﬁeld, thereby increasing both the angle of lag of the counter EMF phasor and the magnitude of the stator current. It is interesting to note that during all this load variation, however, except for the duration of transient conditions whereby the rotor assumes a new position in relation to the rotating magnetic ﬁeld, the average speed of the machine does not change. As the load is being increased, a ﬁnal point is reached at which a further increase in δ fails to cause a corresponding increase in motor torque, and the rotor pulls out of synchronism. In fact as stated earlier, the rotor poles at this point, will fall behind the stator poles such that they now come under the inﬂuence of like poles and the force of attraction no longer exists. Thus, the point of maximum torque occurs at a power angle of approximately 90◦ for a cylindrical-rotor machine, as is indicated by Eqn. 68. This maximum value of torque that causes a synchronous motor to pull out of synchronism is called the pull-out torque. In actual practice, the motor will never be operated at power angles close to 90◦ as armature current will be many times its rated value at this load.

Eﬀect of changes in ﬁeld excitation on synchronous motor performance

Intuitively we can expect that increasing the strength of the magnets will increase the magnetic attraction, and thereby cause the rotor magnets to have a closer alignment with the corresponding opposite poles of the rotating magnetic poles of the stator. This will obviously result in a smaller power angle. This fact can also be seen in Eqn. 68. When the shaft load is assumed to be constant, the steady-state value of Ef sin δ must also be constant. An increase in Ef will cause a transient increase in Ef sin δ, and the rotor will accelerate. As the rotor changes its angular position, δ decreases until Ef sin δ has the same steady-state value as before, at which time the rotor is again operating at synchronous speed, as it should run only at the synchronous speed. This change in angular position of the rotor magnets relative to the poles of rotating magnetic ﬁeld of the stator occurs in a fraction of a second.

This is shown in Fig. 57, where the locus of the tip of the Ef phasor is a straight line parallel to the VT phasor. Similarly, from Eqn. 69, for a constant shaft load,

This is also shown in Fig. 57, where the locus of the tip of the Ia phasor is a line Curves of armature current vs. ﬁeld current (or excitation voltage to a diﬀerent scale) are called V curves, and are shown in Fig. 58 for typical values of synchronous motor loads. The curves are related to the phasor diagram in Fig. 57, and illustrate the eﬀect of the variation of ﬁeld excitation on armature current and power factor for typical shaft loads. It can be easily noted from these curves that an increase in shaft loads require an increase in ﬁeld excitation in order to maintain the power factor at unity.

Eqn. 74 is based on the phasor diagram and the assumption that Ra is negligible. It is to be noted that instability will occur, if the developed torque is less than the shaft load plus friction and windage losses, and the expression under the square root sign will be negative.The family of V curves shown in Fig. 58 represent computer plots of Eqn. 74, by taking the data pertaining to a three-phase 10 hp synchronous motor i.e Vph = 230V and Xs = 1.2Ω/phase. 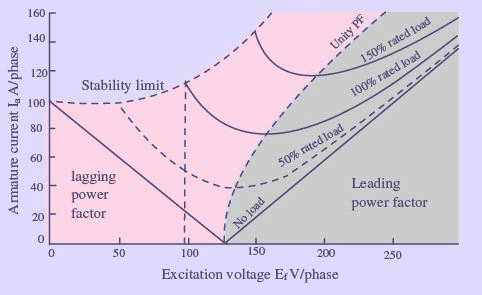 Figure 58: Family of representative V curves for a synchronous motor

The ﬂow of power through a synchronous motor, from stator to rotor and then to shaft output, is shown in Fig. 59. As indicated in the power-ﬂow diagram, the total power loss for the motor is given by

(75)where: Pscl= stator-copper lossPf cl = ﬁe1d-copper.lossPcore = core lossPf,w = friction and windage lossPstray = stray load lossExcept for the transient conditions that occur when the ﬁeld current is increased or decreased (magnetic energy stored or released), the total energy supplied to the ﬁeld coils is constant and all of it is consumed as I 2R losses in the ﬁeld winding. Just as in the case of the synchronous generator, the overall eﬃciency of a synchronous motor is given by

Generally, the nameplates of synchronous motors and manufacturers’ speciﬁcation sheets customarily provide the overall eﬃciency for rated load and few load conditions only.Hence, only the total losses at these loads can be determined. The separation of losses into the components listed in Eqn. 75 needs a very involved test procedure in the laboratory. However, a closer approximation of the mechanical power developed can be calculated by subtracting the copper losses of the armature and ﬁeld winding if these losses can be calculated. The shaft power can then be calculated subtracting the mechanical losses from the mechanical power developed.