Solution: The syntax directed definition can be written for the above grammar by using semantic actions for each production.

For the Non-terminals E,T and F the values can be obtained using the attribute “Val”.The taken digit has synthesized attribute “lexval”.In S→EN, symbol S is the start symbol. This rule is to print the final answer of expressed.Following steps are followed to Compute S attributed definition1. Write the SDD using the appropriate semantic actions for corresponding production rule of the given Grammar. 2. The annotated parse tree is generated and attribute values are computed. The Computation is done in bottom up manner.3. The value obtained at the node is supposed to be final output. PROBLEM 1:Consider the string 5*6+7; Construct Syntax tree, parse tree and annotated tree.Solution:The corresponding annotated parse tree is shown below for the string 5*6+7; 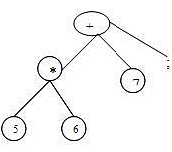 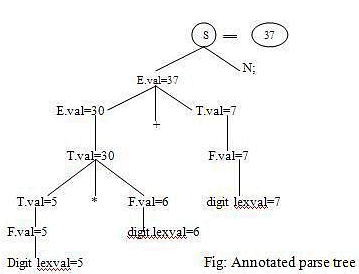 Advantages:SDDs are more readable and hence useful for specifications Disadvantages: not very efficient.Ex2:PROBLEM :Consider the grammar that is used for Simple desk calculator. Obtain theSemantic action and also the annotated parse tree for the string3*5+4n. L→En E→E1+TE→TT→T1*FT→FF→ (E)F→digit 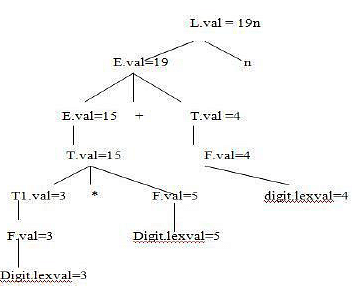 Applications of Syntax-Directed Translation• Construction of syntax Trees – The nodes of the syntax tree are represented by objects with a suitable number of fields. – Each object will have an op field that is the label of the node. – The objects will have additional fields as follows• If the node is a leaf, an additional field holds the lexical value for the leaf. A constructor function Leaf (op, val) creates a leaf object.• If nodes are viewed as records, the Leaf returns a pointer to a new record for a leaf.• If the node is an interior node, there are as many additional fields as the node has children in the syntax tree. A constructor function Node takes two or more arguments: Node (op , c1,c2,…..ck) creates an object with first field op and k additional fields for the k children c1,c2,…..ck Syntax-Directed Translation SchemesA SDT scheme is a context-free grammar with program fragments embedded within production bodies .The program fragments are called semantic actions and can appear at any position within the production body.Any SDT can be implemented by first building a parse tree and then pre-forming the actions in a leftto-right depth first order. i.e during preorder traversal.The use of SDT’s to implement two important classes of SDD’s1. If the grammar is LR parsable, then SDD is S-attributed.2. If the grammar is LL parsable, then SDD is L-attributed.